Smaug the Golden was one of the last of the great fire-drakes, and said to be the greatest dragon of his time - "a most specially greedy, strong and wicked worm".[1] However, he was not the last great dragon. Fellow fire-drakes Draigoch the Red[2], and Thostír the Rank outlived him, as did the great cold-drake, Hrímil Frost-heart.[3][4]

At some time during the twenty-eighth century of the Third Age, Smaug came to hear of the immense wealth amassed by the Dwarves of the Lonely Mountain during the reign of King Thrór, the Dwarves of Erebor, and was drawn towards this wealth. It is also said that he attacked in retaliation for the slaying of some of his lesser kin. The Dwarves denied this deed,[4] but it was later believed to be the work of Karazgar, the Weeping Warrior, who was sent by Sauron to set Smaug against them.[5]

In the Third Age, 2770,[6] Smaug descended in fire on the Lonely Mountain without warning, destroying the Dwarf-kingdom of Erebor and the nearby township of Dale. Smaug claimed the treasure of the Dwarves for himself and forced Thrór, King under the Mountain, and his people into exile.

After driving the Dwarves out of their stronghold, Smaug occupied the interior of the mountain for the next 150 years, guarding the vast hoard of Dwarven treasure. Sauron's initial attempts to make Smaug his servant ended with no success, and none of the emissaries the Dark Lord sent to Erebor returned alive.[7] However, Karazgar was able to use fear as a tool to convince the Dragon to submit to Sauron. Smaug promised to come to his new master's side after several years would pass.

'It is common knowledge the cunning worm seized this very mountain, Erebor, from the Dwarves and made it his lair for many long years.
What fewer know is from whence Smaug the Golden came. The answer, of course, is the North, where the great Dragons dwelled.
Why he came south, I cannot say, but it is written that his hatred of the Dwarves runs old and deep, ever since discovering five young worms slain, and wrongly blaming Durin's Folk.'

Smaug was slain by Bard in T.A. 2941 while attacking Esgaroth[6][8], where his bones still lie. This deprived Sauron of a servant's potential he had hoped to use in the coming war, the results of the careful planning of the Wizard Gandalf who had sought to to limit the Dark Lord's foothold in the North . After Sauron's fall, in T.A. 3019, Karazgar plotted to use Smaug's bones to counteract the dragon-venom afflicting him.[4][9] 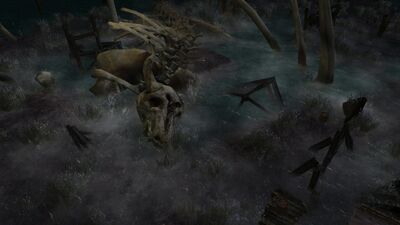 The remains of Smaug.