The track "Far Ahead the Road Has Gone" was the original main theme for LotRO, played on the character selection screen until 2012 when it was replaced by "LotRO Legacy" from the Riders of Rohan soundtrack.

Guitar used to record "Home from the Hunt" 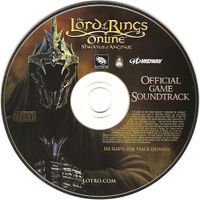 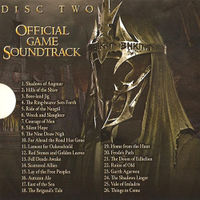 Soundtrack Sleeve; Disc One is a "Making Of" DVD

Chance Thomas' involvement began in 1998, when Sierra On-Line started developing Middle-earth Online, the game that through many revisions would eventually become Lord of the Rings Online. As the game went through different companies and developers, Thomas remained involved until finally recording the music for the game when Turbine took over. At least some of the music written early on ended up in the final release of the game, including the music for Rivendell, "Red Stones and Golden Leaves."

To prepare for creating this music, Chance Thomas studied the Lord of the Rings books, searching for any and all information relating to music and how it connected to the various races. He took all this information and put it together as the Tolkien Music Style Guide. This Guide he used in the creation of all LotRO music, extending to his future work on the series as well. Some of the music was recorded with a 65-piece orchestra and 24-voice choir, while other music used small ensembles. For instance the Shire had music using the penny whistle, mandolin, hammer dulcimer, papoose, and fiddle, Dwarven music using cello, English horn, clarinet, tuba, and wire strung harp, or Elven music using concert pedal harp, solo voice, and flute. After this Thomas brought back various soloists and recorded hundreds of solo variations of the main themes and put the best ones in the game. Near the end of the project Thomas had to use digital samples for various tracks as the budget for live instruments ran low.

The solo guitar tracks on the soundtrack were all composed and performed by Geoff Scott, whose official role at the time was "Director of Audio, Video and Visual Effects". The track Home from the Hunt was performed on an Ernie Ball Earthwood Acoustic Bass.

Brad Spear's "Silent Hope" uses Chance Thomas' theme from "Hills of the Shire" as a basis for the track.