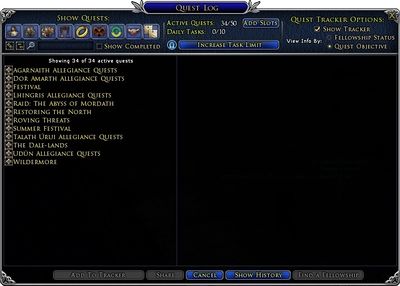 The Quest Log is an UI window that displays current quests and a check-box toggles it to display completed quests. Quests are organized and ordered in a few different but intuitive ways. This page is a non-exhaustive overview of the Quest Log and its elements. For details on how we at this wiki make use of the data, see Quest: Explanation of Parameters.

Notice 1: It is possible to select text and copy (Ctrl-C) from the Quest Log. This is handy when adding quests to this wiki, or updating or correcting existing quests.

Notice 2: The Quest Log does not include two elements of a quest that we really want to have at the wiki-page. For both of them taking screen-shots is very helpful.

Topmost is an area with options for filtering, the useful "Show Completed Quests", and options for the Quest Tracker. In the middle left Quest Groups are listed, and in the middle right are the Quest Overview displayed. At the bottom are some buttons for managing a selected quest.

Notice that cancelling a quest just removes it from the list of accepted quests, the quest-giver will offer the same quest until it is completed but there is always a cooldown of anything between minutes to a day. It has a confirm dialogue, yes! 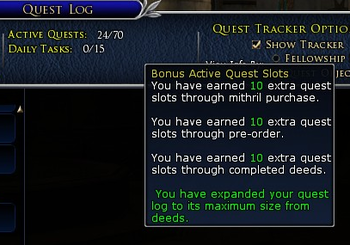 During Update 22.3 a search bar was added to the Quest Log interface.

Characters start out with 40 active quest slots, meaning that they can accept up to 40 quests in their Quest Log at a time. Additional quest slots can be obtained as follows:

The leftmost area displays all quest groups in alphabetical order.
The groups are for example geographical region (e.g. Bree-land), class quests (e.g. Hunter, which the character for the image to the right seems to be), Epic Quests (which in turn are split on "Volume" and "Book"), special quests (events, started from certain mails, etc.), and crafting quests. Each such group is first ordered by level and then alphabetically.

Each quest displays small icons such as for Epic, recommended fellowship type or Raid, or Repeatable.

The rightmost area displays an overview for a selected quest.

Topmost is a (blue) field with quest data and this field states many important characteristics about a quest:

The middle field is different for a completed quest compared to a current quest:

Current: The image to the right displays a current quest and the next objective is to "Defeat Drâgh" together with the text for that objective. Below it displays the Background for the quest. However, it does not display the bestowal dialogue. Below (not displayed at the image) are also possible rewards listed.

Completed: The Quest Log displays the Bestowal Dialogue, the Background, and each Objective text but not the Objective itself. Possible Rewards are also listed. See example image.