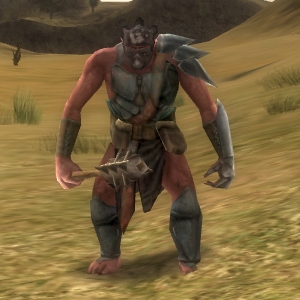 There are few tales more frightening in all of Eriador than those of the Orcs and Goblins that strike from the shadows against the Free Peoples of Middle-earth. Many believe these are simply tales of fancy, spun by storytellers to keep children safely within their homes at night for fear of being gobbled up in the darkness. Experienced adventurers, however, know the truth.

Orcs are the foot soldiers of the Enemy, a brutal, deformed, Man-like race of warriors. Their origins are shrouded in the mists of history. The most popular theory is that they were bred from captured Elves, twisted and mutilated by torture and black magic by the Dark Lord Morgoth in the First Age. Others believe that Orcs have kinship with Men, or that both races were used as breeding stock for Morgoth's armies.

As creatures of darkness, Orcs are fearful of the sun, though unlike Trolls, its light is not actually deadly to them. What Orcs lack in intelligence and strategy, they make up for in sheer overwhelming numbers. They are carnivorous and will eat anything. Some claim they will even cannibalize each other when rations run low.

The sub-races of Orc-kind include:

While our modern notion of the Orc comes from the work of J.R.R. Tolkien, the author adapted the term from "orcnéas," an evil creature of ambiguous nature mentioned in the Anglo-Saxon poem, Beowulf. "Orcnéas" has at times been translated as "Orcus-corpse," in reference to the Roman god Orcus, suggesting an undead creature or demon of the Underworld.