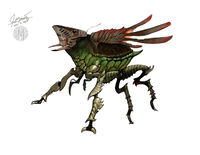 Neekerbreekers are a breed of gigantic cricket-like insects. Their name is taken from the Hobbits' term for the maddening sound these creatures make. Like the great Spiders and Sickle-flies, the Neekerbreekers have begun to increase in size and aggressiveness in these dark times. Whether this is natural or guided by evil forces is unclear. In addition to regular Neekerbreekers, the species also includes the Nerbyg (singular: Norbog).

Neekerbreekers are considered normal difficulty. Some are aggressive while others threaten beforehand. They are weak to Beleriand damage and resistant to Common damage.

They are found in swampy areas including the Midgewater Marshes, in Bree-land, Haragmar in the Lone-lands, Barandalf in Evendim, and in Western and Eastern Malenhad in Angmar.

Samwise Gamgee refers to the crickets of Bree-land as "Neekerbreekers" in The Lord of the Rings, based on their obnoxious sound. Unlike the game's interpretation, J.R.R. Tolkien's version of these creatures did not appear to be of gigantic size, though the heroes never actually encountered one.