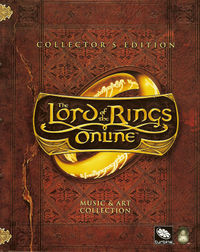 For the Mines of Moria expansion, Chance Thomas was asked to create around 40 minutes of music, with Stephen DiGregorio creating the rest. Thomas used live instruments, specifically the Utah Film Orchestra and singers from the Mormon Tabernacle Choir, while Stephen DiGregorio's contributions used synthesized instruments. A first for Thomas, he did not conduct the recording sessions for his compositions, instead listening from the control room, focusing more on critical listening and giving direction to the recordings.

The vocals in Thomas' recordings consist of Dwarvish words, written by Thomas for these recordings. This can be heard specifically in "Drums in the Deep". Thomas has said he composed "The Golden Wood" entirely in one night, alone in his studio, "as if it poured from [his] very spirit." After recording it many of the musicians went into the control room on their break to hear how it sounded, something he says is incredibly rare as "breaks are sacred to musicians, and any kind of infringement is like insulting Sauron himself." Thomas wrote "A Journey in the Dark" as well as most of the music specifically for Moria locations only "at night, with the lights out in my studio, sometimes composing until 3 or 4 in the morning."

All tracks composed by Chance Thomas or Stephen DiGregorio, as indicated.