Using this skill out of combat will apply Knowledge of the Lore-master to the target. Note that this effect gets applied after the inspect is taken. In other words, whether you take an inspect in- or out of combat doesn't influence the results of the inspection.

The Lore-master Word of Mastery tracery Target Resistance: Debuffing Skills decreases the resistance to this skill by up to 11%. 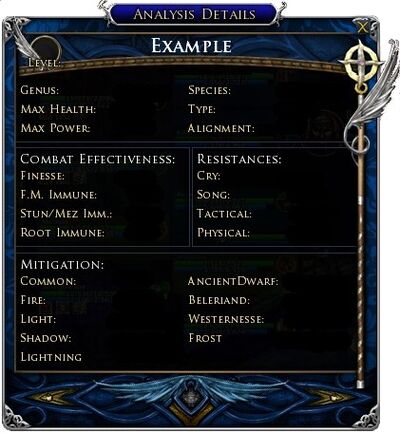 This Analysis box pops up after using Knowledge of the Lore-master on an enemy target. The result will show the relative difficulty of the creature for your Lore-master.

This skill is useful to detect the strengths and weaknesses of enemy targets. Upon use, a box entitled "Analysis Details" will pop up. This box looks like the one to the right, with the exception that it is of course filled in.

Example will be replaced with the name of the creature. Level, Genus, Species, Max Health, Max Power, Type and Alignment are self-explanatory. Combat Effectiveness, Resistances and Mitigation will show results varying from Feeble, Poor, Average, Fair, Good, Superior, Remarkable and Incredible to Extraordinary. Fellowship Maneuver, Stun/Mez and Root Immunity show True or False. In the Analysis box, they show up as follows:

The result shown in the Analysis Details might not be the same for all Lore-masters. This is because the game tries to give an idea of how hard the creature is compared to the particular Lore-master inspecting it. The results of an inspection of the same creature will be different if taken by two Lore-masters of which one has a much higher or lower level than the other. This is how it works.

For mitigations, this formula is:

Sometimes it looks like all the mitigations of an enemy are the same, even though they are in fact not. One value can be at the lower end of the category, while another is at the higher end of the same category. It would look in the inspect as if the resistances or mitigations of these are the same, even though there is in reality a difference of several percentages. A way to get around this is to apply an armour debuff such as

Ancient Craft to the enemy. The more armour debuffs you apply, the better it works, so use more if you have them at your disposal. If you inspect while an armour debuff is applied, some values might just shift into another category.

Finally, using Knowledge of the Lore-master will not cause an enemy to aggro. Using it on a stealthed enemy will break it out of stealth, but will not aggro it. You can thus safely inspect without having to fight. It cannot be used on Creep characters or friendly players in a spar. It can, however, be used on pets, since the game regards them as NPCs.

Other classes can inspect as well, but need a Wildlife of Middle-earth Tome (consumed on use) for it, bartered at Caras Galadhon.