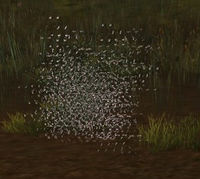 Insect Clouds are normal sized insects that act as a group rather than individually. Generally insect swarms will detect movement and follow a player around for a time. While doing so, the player suffers from the Distracting Cloud debuff. If ignored the insect swarm will eventually grow bored and leave the player alone. Players can regain the interest of the insect swarm at a later time.

As with other Spiders and Insects, insect swarms are weak to Beleriand damage.

They are found around other Spiders and Insects in places such as Rushock Bog in the Shire, Barandalf and Men Erain in Evendim.