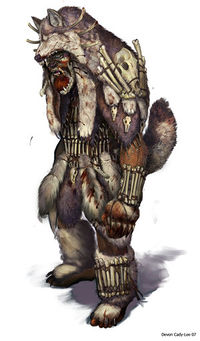 Gauredain tribes are found in Northern Emyn Uial in Evendim, Tâl Bruinen in the Trollshaws, Southern High Pass in the Misty Mountains, and across Forochel, especially at Barad Gaurhoth. They are usually "normal" and are always aggressive. They have no specific weaknesses or resistances.

Wild men have dwelt in the North of Middle-earth since the Elder Days, troubling even the ancestors of the Dúnedain in times long forgotten. When Elendil and his sons came to Eriador after the fall of Númenor, they found these lands occupied by these Men of Darkness, and warred with them when they founded their kingdom of Arnor upon the shores of Lake Evendim.

The wild men withdrew from the might of Arnor, but they were not vanquished. In time, they came back to power: the Hill-men wrested control of the kingdom of Rhudaur, while in the west, in lands emptied by the abandonment of Annúminas, another clan took control. These were the Gauredain, the Wolf-men, and they remain blood enemies of the Dúnedain to this day.

The Gauredain, followers of the Witch-king of Angmar during his war against Arnor, have an ancient affinity for the Wolves of the North. They emulate these vicious beasts, wearing wolf-hides and going about on all fours when entering battle. These savage men use their fearsome behaviour to terrify their prey, though even more terrifying is the rumour that they eat flesh . . . any flesh.

Most Gauredain are found in the following areas: Northern Evendim, Tâl Bruinen, the Southern High Pass and throughout Forochel.