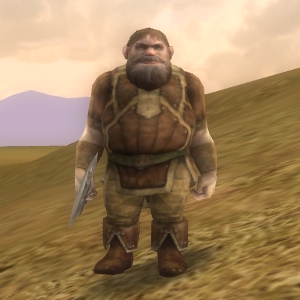 Although most Dwarves are counted among the Free Peoples of Middle-earth, some have been lured into the ways of evil. The Dwarves have often been a proud, greedy, or slightly mistrustful race and these tendencies can occasionally be magnified to take them down a darker path.

One such group is the Dourhand Dwarves. The Dourhands are a scattered people composed of outlaws and brigands excluded from the Seven Houses of the Dwarves. They are descended from a dwarf-kingdom in the Blue Mountains that long ago fell into ruin (this was possibly either Belegost or Nogrod, which were mostly destroyed during the War of Wrath in the First Age). The Dourhands owe their allegiance to Skorgrím Dourhand, the ancient founder of their tribe who has recently returned as a wight.

Another group of hostile Dwarves are the Firehorn clan. They are an offshoot of the Stout-axe Dwarves of Mordor. They are descended from one of the Dwarf clans of the East, though their history and original name have been forgotten. Long ago, the Stout-axes were promised a Ring of Power by the Dark Lord and their desire for this Ring doomed their people to ruin and thralldom in the land of Mordor. While most Stout-axes have since allied themselves with the Longbeard Dwarves and the Free Peoples, some chose to retain their allegiance to the forces of darkness. These Dwarves became known as Firehorns.

Unfriendly Dwarves are mostly "normal" and have no specific weaknesses or resistances.

Tolkien's early conception of Dwarves in The Book of Lost Tales gave them a more villainous role as followers of the Dark Lord Morgoth. Later, he revised his ideas and made Dwarves one of the Free Peoples. The developers of The Lord of the Rings Online have imagined what a race of evil dwarves might be like. While they do not have the rights to the other Dwarf clans mentioned in Tolkien's works, there are hints within the game that the Dourhands, Stout-axes, and Firehorns may be descended from some of these other Houses of the Dwarves.