This page is about the creature itself. For other uses, see Durin's Bane. 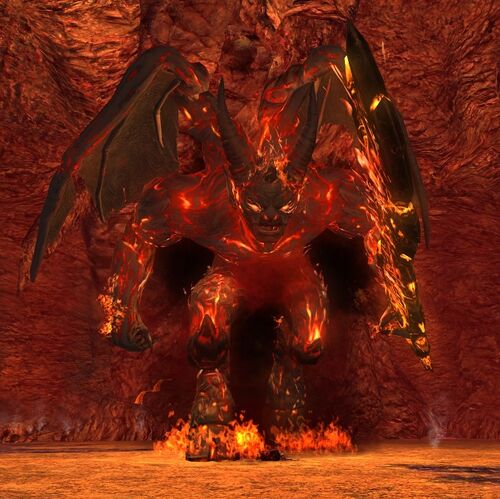 Durin's Bane was a Balrog, awakened from hibernation by the Dwarves beneath Moria. After driving the Dwarves from Moria and slaying King Durin VI, it was eventually slain by Gandalf over a millennium later.

The Balrog slumbered for many years in the caverns of Azanarukâr, deep in the Foundations of Stone in Moria. In 1980 of the Third Age, it was awoken by the dwarves of Moria, mining deeper into the mountains in search of mithril. Durin VI was slain. His son, Náin I, took the throne, and though he fought to maintain the dwarves' hold on Khazad-dûm, he was slain himself the following year and the dwarves abandoned their home, now called Moria, the Black Pit.

Durin's Bane remained in Moria until the Fellowship of the Ring passed through in January of 3019 TA, when it fought against Gandalf. Both Gandalf and the Balrog were slain, their battle finally ending after ten days on the peak of Zirakzigil. [14.9N, 108.7W]

To the Longbeards of the First Age, this Balrog was known as Askâdurs of the Fortress. It was instrumental in the ruin of Biriz-zahar, better known now as Sundergrót, the city of Mótsog the Traitor and the Greymauls, though it fled the Sunder-battle when the tide turned against it and its allies.

Though Durin's Bane appears more than once as a raid boss, it also appears as a non-combatant in several story instances: