Dorozg the Beast Tamer can be found within the Cave of the Slumbering Beast in the instance The Grand Stair at [71.8N, 139.1W]. 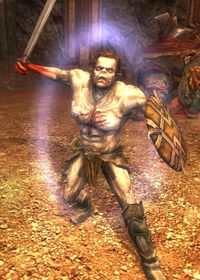 At the start of the fight, the goblins who keep The Beast asleep with their drumming run away. Unless you want to fight the Beast and Dorozg at the same time, you need someone to play the drums during the whole fight. Assign someone to this important task and let him or her start right away. When Dorozg dieds, the Beast will wake up. The drumming person needs Drum Use to be able to drum. Minstrels are able to use the drums and can teach others to do so.

The summoner of great beasts may inspire less awe than his fearsome minions, but left alive, he is deadlier than his mightiest underling.