Wisdom of the Council

Wisdom of the Council 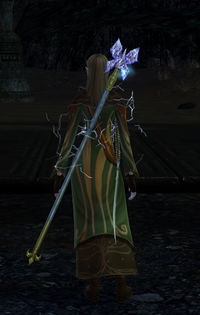 A Lore-master under the effect of Wisdom of the Council. Note the sparkles around the chest and shoulders.

Using this skill will cause

Wisdom of the Council to occur on yourself.

Wisdom of the Council is the Lore-master's "big self-heal", restoring half or more of his or her own morale pool. It has a reasonably long cooldown and is thus best used in emergency cases.

After use, the Lore-master receives a small buff which reflects a small amount of light damage to attacking enemies and has a chance to stun them or absorb damage received.

This skill is a reference to the White Council as it occurs in Tolkien's books: a council of wise elves and wizards, gathering in the Third Age to discuss the threat of Sauron to Middle-earth. The bearers of the three Rings of the Elves, Galadriel, Elrond Halfelven, Gandalf and Círdan the Shipwright were members, as well as Radagast the Brown and Glorfindel. Saruman the White was chosen as the council's head, although Galadriel was in favor of Gandalf.

It was under the influence of the White Council that the Necromancer was driven out of Dol Guldur.

The Lore-master jumps in the air and lands with his or her staff firmly planted in the ground, at which point he or she receives a large heal. Afterwards, there are sparkles around the Lore-master's chest and shoulders, reflecting light damage to attacking enemies and occasionally stunning them or absorbing incoming damage.