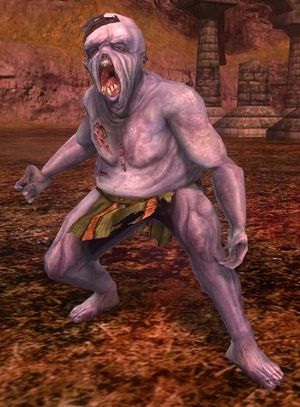 Wights, also known as Barrow-wights, are terrible fell creatures controlled by dark spirits sent out of Angmar to stir the bones of the dead. They hide in graves and barrows, preying upon those unwary of the danger. These spirits are servants of the Witch-king, originally sent to prevent the Dúnedain realm of Cardolan from rising again after the civil war that led to the downfall of the North Kingdom. Since this invasion, wights have been sent to other regions of Middle-earth with similar purpose.

The bodies of wights are at various states of decay. Some still possess bloated, rotting flesh, within which lurk deadly Crawlers. Other wights are nothing but animated skeletons. Still others exist simply as severed arms, crawling across the ground with fearful intelligence and purpose. Wights frequently carry an aura of poison or the ability to spew deadly pestilence from their mouths.

Related creatures include the Gaunt Men, undead beings that possess the power of sorcery and can be found commanding or summoning wights, and Draugar, the powerful poison-spewing wights of Rohan.

Wights tend to be of Normal Difficulty and are always aggressive. They are particularly weak to Westernesse damage and resistant to Physical damage. Stronger wights, those who are Elite difficulty and up, are also resistant to Common damage. Wights are found throughout all of Middle-earth, wherever there are barrows and graves. These places include Haudh Lin (Ered Luin); Barrow-downs (Bree-land); Nan Dhelu (The Lone-lands); Nan Tornaeth (The Trollshaws); Fields of Fornost (North Downs); Imlad Balchorth (Angmar); and Kibilzahar (Forochel), among others.

The term "Wight" is an archaic word meaning simply "man" or "living being." Despite its use in later fantasy fiction, "wight" did not specifically refer to the dead in its original context. When J.R.R. Tolkien used the term "Barrow-wight," he likely meant it to mean "grave-man," i.e., a human-like creature that haunts burial sites. Tolkien's Barrow-wights were probably inspired by the undead Draugar of Norse mythology (which exist as a specific type of wight in The Lord of the Rings Online). Authors have occasionally used "Barrow-wight" as a translation of Haugbui, an alternate name for the Draugar.