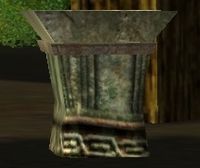 The Tag Beacon awaiting the start of a game.

Tag and Freeze Tag are Leisure Activities (i.e. not quest related) which can be enjoyed by players of all levels at all times of the year, not just during festivals.

There are two tag arenas located within ruins southeast of the Festival Grounds in Bree. 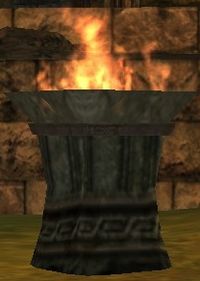 In traditional Tag, each game consists of one player attempting to tag other players to transfer the title of tagger to another player while staying within the bounds of the ruins.

To play Tag, visit Tad Hollyway at the ruins overlooking the Hedge Maze, southeast of the Festival Grounds in Bree and activate the Tag Beacon. [25.6S, 50.9W]

"You've joined a game of Tag! When you're it, run into another player to tag them. Leaving the tag area will end the game. Remember, no tagbacks!"

In Freeze Tag, the player who is "it" tries to freeze every player by touching them while the other players attempt to free the frozen players and escape the tagger.

To play Freeze Tag, short distance away to the east, is another set of ruins where you can engage in "freeze tag." Biddy Dogwort oversees this Tag Beacon [26.2S, 49.7W].

"You've joined a game of Freeze Tag! If you're unfrozen, you can rescue a frozen player by standing next to them for a few seconds.

The Freeze Tag arena is multi-level!
Once all players are frozen the game will announce that the It player has won.