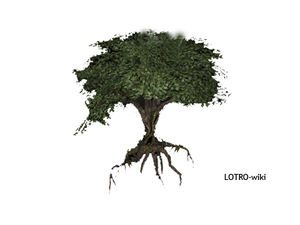 Those who live near the forests of Middle-earth are often heard telling tales of the ancient power that lies within darkened woods; trees speak to one another in voices all their own and have even been seen, although admittedly on rare occasions, to move and travel of their own free will. Many of these tales are simply dismissed as ancient legends of the forest, but adventurers within Middle-earth would do well to hear the truth of these tales. These "walking trees" do indeed exist. Though each is as unique as the very trees themselves, most are said to be thick and gnarled, with long, arm-like branches, deadly, grasping, twig-like claws, and are capable of moving at great speed, especially when the need is dire.

Few know the true origin of the Huorns, for these forest-dwellers are no doubt ancient. Some say they are a form of Ent, the legendary tree-shepherds, changed over time to be more like the trees of ancient forests such as Fangorn far to the east. Others claim they are trees, coming to awareness and becoming more like the ents of the ancient legends. It is known that huorns can speak the language of the ents and are often seen working together with the forest guardians against the rising forces of darkness.

No matter their origin, the powerful huorns spend most of their days moving little, watching as silent protectors, usually deep within the darkness of their woodland homes. However, they are fiercely protective of the ancient stands of Middle-earth and fight with unmatched speed and deadly effectiveness when called into action to defend their land and their ages-old secrets. While most are simply wild and dangerous without the guidance of the ents, there are others still, called Black Huorns, who are rotten to the core and will harm anything that walks on two legs.

Some Huorns have Bees in their branches that defend them when attacked.

An index from the journals of all sighted dangerous Huorns: