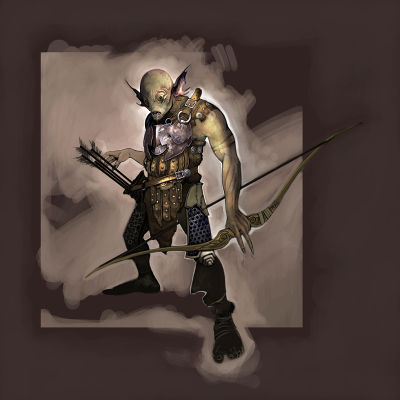 "Goblins are an odd study in group-thought. As individuals, they are sniveling cowards who recoil from anyone who appears remotely stronger than themselves -- in large masses, they are known to hurl themselves with unthinking savagery onto pike and axe. The common wisdom is that in large groups the goblins in front simply have no choice, as they are pushed forward by the teeming masses behind them, and so they fight like cornered animals." — Enmity of the Goblins III

Goblins are based upon monstrous creatures depicted in European mythology. In The Hobbit Tolkien used the word as an English version of the name orc. In the Lord of the Rings, goblins and orcs are virtually interchangeable names. In the game goblins tend to be smaller and weaker than orcs. Goblins and orcs are often members of the same tribe.

Goblins live in tribes, with the larger ones having a king as their leader. The tribes often include orcs and larger creatures such as Trolls and Uruk-Hai. Some tribes, such as the White Hand, have been formed by various leaders of the dark forces and may comprise members that once were in different tribes. Other tribes form the garrison of some of the fortresses and other places of the forces of darkness.

Listing of all named goblin types and individuals.