This page is about the dismounted Glothrok. For the same mob while mounted, see Glothrok the Vile. 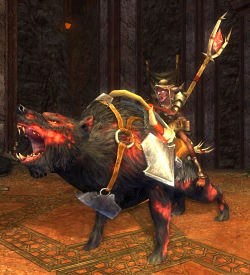 Glothrok the Vile is found guarding the Highpeak Kennels in the 6-player instance The Grand Stair in Moria. [71.2N, 137.8W]

The fell Warg-rider, paired with his mount, is a terrifying foe, doubled in strength with his fanged companion bearing him upon his endeavours.