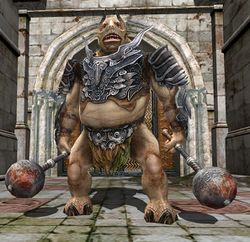 Gertheryg (Singular: Gorthorog) (Sindarin for Horror-troll) are a form of Troll-kind from the First Age, skilled in martial combat and far more intelligent than their modern cousins. In the Elder Days, the Gertheryg were fearsome warriors of Morgoth's army, the pinnacle of the Dark Lord's breeding experiments that first produced the race of Trolls. But by the Third Age, they had almost died out. Only a few remained in the Northern Waste, the frigid remnant of Morgoth's evil realm. These were soon recruited by the Witch-king for his war with Arnor and they aided in the destruction of that kingdom. The Gertheryg remained in Angmar and Mordor following this conflict, willingly serving the new Dark Lord Sauron.

They were used as breeding stock to produce the Olog-hai, the perfected "super-soldier" Trolls of the War of the Ring. Indeed, Olog-hai are also classified as Gertheryg by Lore-masters.

Gertheryg are Signature or higher and are always aggressive. They are resistant to Light and Fire damage. It is the only known species where Common damage is preferable to Fire or Light.

Gertheryg do not appear in the work of J.R.R. Tolkien. They were created for The Lord of the Rings Online. Olog-hai, however, are featured in The Return of the King.