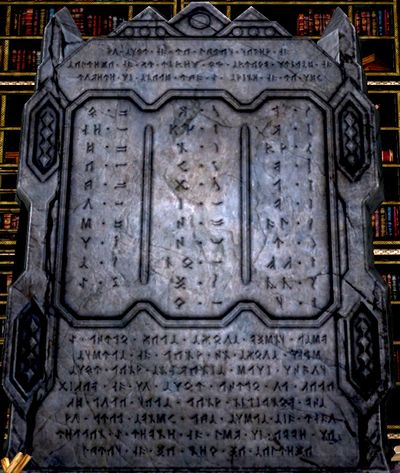 This massive rune-inscribed tablet, along with its mate, can be found within Agshar-mazal, the Scholar's Abode in Erebor, where both were carved by the Dwarf scholar Rói.

The stone holds the key to deciphering the Felak Karâth, the runes of the Zhélruka Dwarves from the East.

The inscription on the stone is reversed, as if seen in a mirror. When flipped to the proper orientation, it can be seen to consist of text written in Cirth runes in the Angerthas Erebor mode.[1] The inscription is divided into three sections: the top and bottom sections describe the Felak Karâth and provide instructions for reading (and writing) these runes, while the middle section is a table of mappings between corresponding Felak Karâth and Cirth runes.

A sample text written in Angerthas Daeron, Angerthas Erebor, and Felak Karâth can be found on the neighbouring Edda-stone.

Transcription of the top section 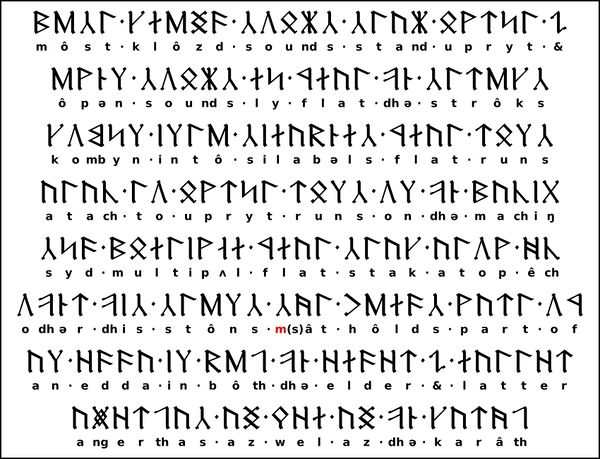 Transcription of the bottom section

The top section translates as:

The Felak Karâth are the runes of the Eastern Dwarves, who never owned the Angerthas. Here are the glyphs and their equals in Erebor.

The bottom section translates as:

Most closed sounds stand upright and open sounds lie flat. The strokes combine into syllables. Flat runes attach to upright runes on the matching side. Multiple flat stack atop each other. This stone's mate holds part of an Edda in both the Elder and Latter Angerthas, as well as the Karâth. 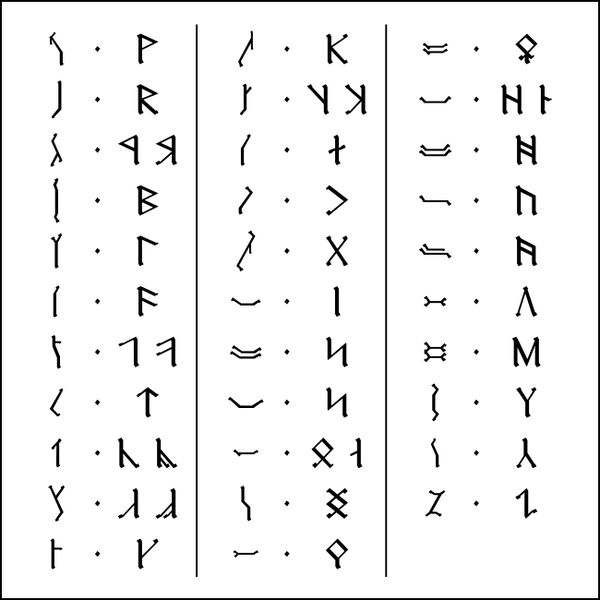 As stated in the translated inscription on this page, the Felak Karâth are the runes used by the Dwarves of the East, the Zhélruka.

The inscription also indicates that the Felak Karâth writing system is not a true alphabet, where the markings for vowels and consonants are separate and equal, but rather an abugida,[2] a type of writing system in which the primary letters represent the consonants, and the vowel markings are secondary and combine with the consonant-letters. In Middle-earth lore, this places it in the same category as the Tengwar, the script used to write Elvish.

The middle section of the inscription consists of a table that maps each individual Felak Karâth glyph to the Cirth character(s) that represents the same sound. The Felak Karâth appear on the left and the Cirth on the right in each column. Some Karâth glyphs double for two related sounds, for which there are two separate Cirth. E.g. the Karâth on the third row of the first column can represent either 'f' or 'v', so the Cirth for both sounds appear on the right.

Additionally, one Certh appears twice, on the seventh and eight rows of the second column, because the same Certh is used to represent two different sounds (long 'i' and 'y' respectively) for which there are two separate Karâth.

All tribes of Dwarves had the same language, Khuzdul, which was given them by their creator, the Vala Aulë. However, they originally had no writing system with which to write their language down.

The Elf Daeron invented a system of runes, the Cirth, with which to write the Elven language Sindarin. The Western Dwarves, who had many dealings with the Elves during the First Age, became familiar with the Cirth and adapted them for writing Khuzdul.

The Eastern Dwarves, however, had no recorded contact with Elves. Thus, according to the inscription, they have their own unique writing system, the Felak Karâth, that appears to have evolved independently of any system known in the West.

It appears, however, that the development of the Karâth may have experienced some slight influence from the Western Dwarves, as the Karâth shorthand for the word "and" is oddly similar to the corresponding Certh.