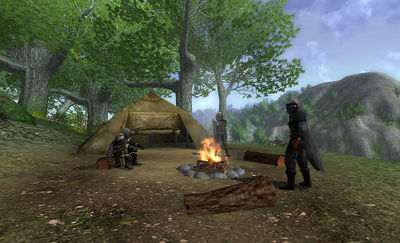 Echad Saeradan is a ranger encampment in the area of the Windfells, in the region of Enedwaith. [63.8S, 17.5W]

Members of the Grey Company will eventually find themselves at the encampment of a well-familiar Ranger, Saeradan of Bree-land, and his companions Andreg and Amlan, hidden in the shadow of Amon Mîn, the ruins of a great Gondorian watchtower now claimed by the Draig-lûth to watch the North-South Road.

The goal of Saeradan and his companions is not only to maintain the secrecy of the Grey Company – at the very least of their identity, if not their passage – but also to seek provisions for the continuing southward journey. This seemingly menial task quickly uncovers a terrible mystery involving creatures of Dunlending legend and folklore. The ox and goatherds of the Uch-lûth live in fear of these creatures, looking to the mysterious crone known as the Old Woman of the Mountain for wisdom and protection.

Besides the Draig-lûth, ordinary wolves, and crebain, adventurers will encounter several creatures in the Windfells. These creatures are all derived from Welsh folklore to mix in with the overall atmosphere of Enedwaith.