This guide is copied from the Lorebook 9 June 2013 -- prior to the Lorebook being removed from service.
Originally by LOTRO user: Lorr

This is a general spoiler warning for the following guide. This guide contains highly detailed information about the Chicken Session quest line and deeds. If you do not wish to be spoiled, I suggest reading only up to the Chicken Skills section. Every section beyond is built around each quest/session, revealing everything about how to accomplish the particular quest/session. If you are having difficulty on a specific quest, use the Table of Contents to jump directly to that specific quest so you don't accidentally get spoiled about other quests if you don't want to.

The reason many of you have sought out this guide, is to acquire the fabled

Cloak of the Cluck 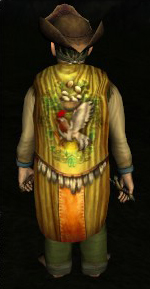 What is Chicken Session

A list of the skills that are available to you while you are a chicken. Click the link to see the detailed entry for each skill.

Nothing can escape your searching gaze. So long as it is a worm.

A burst of speed can make the difference between freedom and flattened.

Middle-earth is a dangerous place. Sometimes it is good to be dead.

You're not sure what, but something isn't right.

Sometimes survival comes down to not being hit. Actually, most times.

Session Time Limit: (No chicken session for this quest)
Bestower: Wald Sandson
Objectives:
Decypher the clues and you will get the following correct order to replace the eggs: Pimpinella, Bellflower, Cineraria, Telltime, and then Moonlight. Once you have put all the eggs back in the proper order, talk with Wald Sandson again.
Rewards:

The Sky is Falling

Maps: Each region listed below has a link to its own sub-page. The sub-page will contain hints/tips as well as a detailed map of the best known path to follow for that particular run. The sub-pages contain links back to this main guide as well.

Speak with: Radagast the Brown

From here it was not too hard to walk through the Old Forest, Barrow Downs, and out the other side to Bree thanks to the new map of the Old Forest. The route to take is:

Creature and Stone locations by Region

There are 3 sets of chicken nests. They allow for two-way teleportation between the indicated nests while you are a chicken. However, they are only available during the final session play quest, Free Range. You can also find the nest locations on the Overall Location Map near the end of this guide.

The page also contains a link back to this main guide.

The explorer deeds are completed by locating the 3 Chicken Stones in each of the required zones. Clicking on the Deed Titles will link you to the official lorebook entry of that deed. I have added maps to the official entry pages that show the exact locations of the Stones. You can also find the stone locations on the Overall Map near the end of this guide.

Speak with Radagast the Brown

Speak with the Aurochs Yearling

This is a map that has icons for every creature, stone, and nest on a single map.

The map is on its own page and is maintained here: Chicken Session Guide Overall Map

Crosser of Roads Walkthrough - Forum thread with original guide and discussions
KidQuantum - For the initial Free Range walkthrough, forum thread, and the inspiration for me to create this Lorebook Guide
FissionChips and RonHiler - For invaluble information on how to get the Gates of Annúminas Stone solo
ClassicAviar - For the wonderful mention of the use of the /stuck command
KeskaRayburn and angeljean- For providing alternative Free Range routes