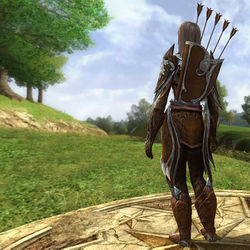 Greetings! Call me Jadzi. I'm a relatively casual player, primarily on the Landroval server. I'm also a regular at the LOTRO forums.

What originally brought me to LOTRO-Wiki was a search for information on Determination deeds. Once upon a time, there were a number of sites that kept such information up to date. Unfortunately, as time has progressed, many of these have fallen by the wayside, as either their creators moved on from the game, or just became too busy with other things to dedicate the time to them. Even the official Lorebook can be horridly out of date in these matters. And while the Lorebook is often updated straight from the game data, this data is often incomplete and inartfully arranged, not to mention being plagued by frequent errors when trying to search it. There is a great deal of work that needs to be done there - but if one is going to go to that amount of effort, why not do so in much more open and responsive format?

A wiki can be so much - just look at the Guild Wars Wiki for example. All it takes is a community of editors rising to the occasion. I hope to advance that effort here in some small way.

I also admit to being a member of the human race. If I make a mistake somewhere, please feel free to correct me. :)

The main thrust of my efforts is on images, both generating them and streamlining their use. In particular: