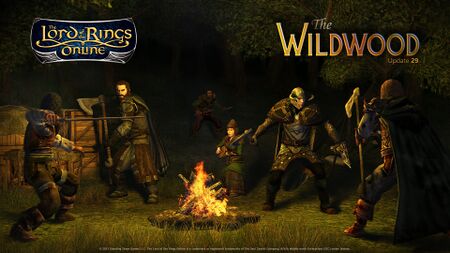 Beyond the Bree-fields lies the lightly travelled wilderness of the Wildwood. This heavily forested area has drawn the attention of two groups of Free Peoples who vie for its resources. The League of the Axe, a group of game hunters and miners down on their fortunes, seek to tap the land's resources and ferry their bounty down the Brandywine from Trader's Wharf to markets abroad. Meanwhile, a group of villagers in Trestlebridge have formed the Woodcutter’s Brotherhood, with the goal of taking advantage of the Wildwood to benefit the folk of Bree-land and rebuild Trestlebridge to its former glory. Both factions must decide the fate of the Wildwood as they work against unsavory Brigands and the Tarkrîp Orcs. The update also includes two new 3-player scaling instances set in Eriador, "Woe of the Willow" & "Agoroth, the Narrowdelve". Free to VIPs and now available in the LOTRO Store!

Visit Enid Nettlesting at the Trader's Wharf in Evendim or Aran Greenwith at the Trestlebridge Gate in North Downs to start the Wildwood quest line. The quests have a challenge level of 45. An introductory questline for the new instances is available from Aragorn in Rivendell after completing "Book 13, Chapter 10: A Trimphant Return" and from Hob Hayward at the Buckland Gate. These quests are not required to enter the instances.

The deeds, 'Agoroth, the Narrowdelve -- Tier 3 -- Leading the Charge' and 'Woe of the Willow -- Tier 3 -- Leading the Charge' will be available for completion through May 2, 2021, turning off at 3am server time on May 3rd. Tiers 4 and 5 of Agoroth, the Narrowdelve and Woe of the Willow will be available starting on April 1, 2021.

LOTRO lighting has been updated! A new Advanced Graphics option named "Per Pixel Lighting Attenuation" has been added for DirectX 10/11 that increases the lighting quality. Toggling this option to true will enable softer lighting as well as more consistently used normalmaps and specular highlights.