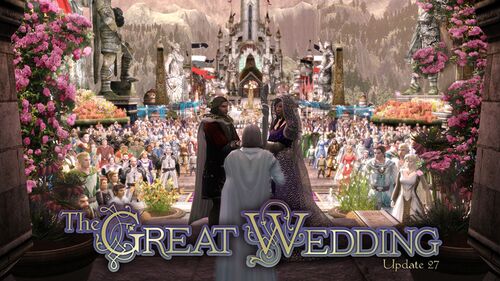 Here are the Release Notes for Update 27: The Great Wedding, released on Tuesday, June 30th.

Hail and greetings to thee, friend of all Free Folk!
Be it known that
Aragorn II Elessar, King of Gondor and Arnor
Son of Arathorn and Gilraen
and
Arwen Undómiel
Daughter of Elrond and Celebrían
request the honour of thy company at their most joyous wedding and the union of Elves and Men
at the Citadel of Minas Tirith on Midsummer’s Day
Please answer, by errand-rider or Eagle
And present thyself to the King at the Tower of Ecthelion