Main character stats like Might, Agility, etc. are like containers. They contain contributions to the stats that really influence your character's performance. These stats can be like Morale, having a direct effect, or various ratings.
Ratings are indirect, in the sense that they provide the base for the calculation of a number of characteristics. Examples of these ratings are Critical Rating, Physical Mastery Rating, Resistance Rating, etc.
Ratings are in turn converted by a formula to percentages (and this can be multiple percentages from a single rating). These percentages then are having the direct effect for having for example a chance at something (scoring a critical hit or parrying an opponent's attack, etc.) or as an enhancement factor (increasing your weapons damage or decreasing the amount of damage received). 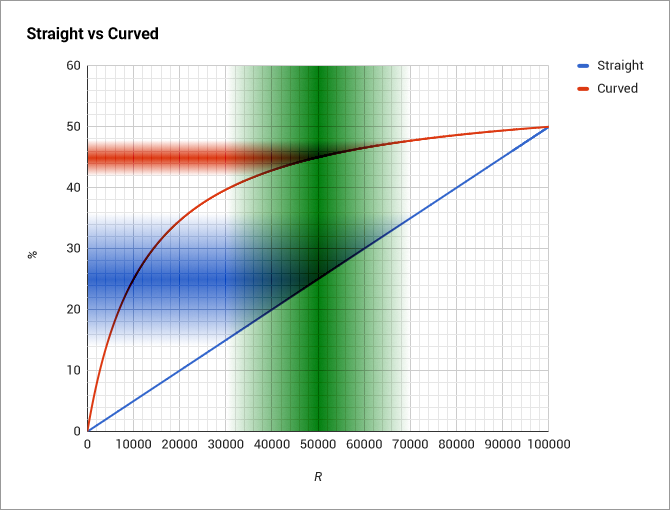 The formulas which the game is using for these conversions, do not result in a linear graph. Instead of a straight rating to percentage calculation, by multiplication of a factor, it's using curved graphs like in the figure above. This has the following properties which are considered an advantage:

For the game developers, it also has some other advantages: 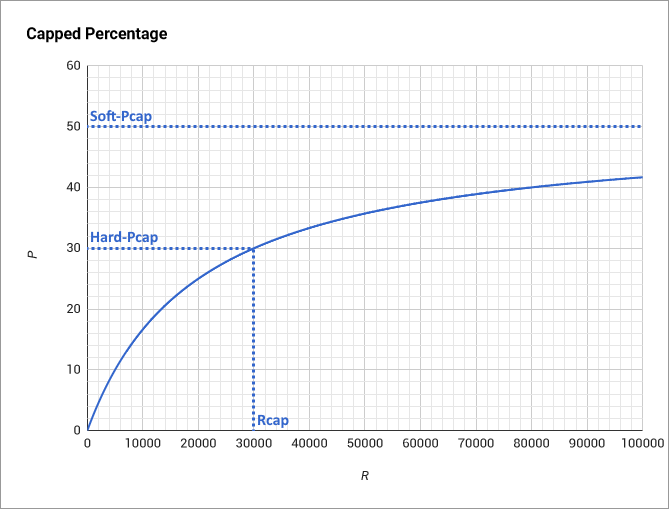 Percentages from ratings are in most cases "capped". This means that a rating percentage (P) has a maximum (Pcap). However, the amount of rating (R) that you can have, is never restricted. It's just not usefull to have more than the required rating to reach the cap (Rcap).
Putting a "hard" maximum on a percentage programmatically (Hard-Pcap) is not the only way to limit a percentage. The calculation formula itself has the property to limit the resulting percentage. This mathematical cap (Soft-Pcap) is unreachable by any rating: the curve will always stay under that limit. 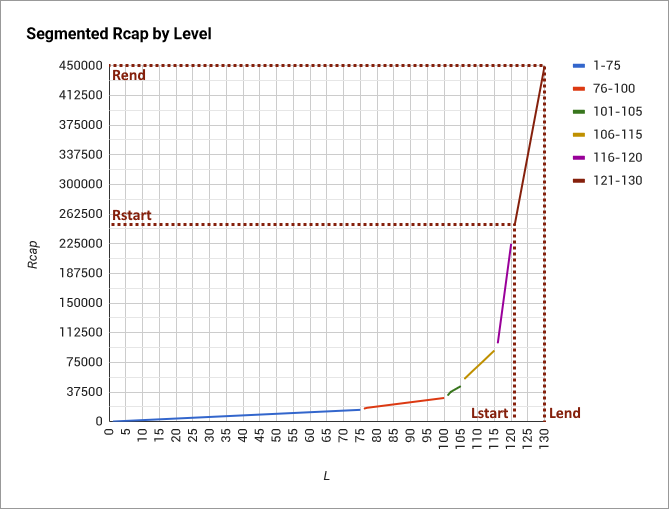 The amount of rating needed to reach percentage caps (Rcap) is raised with level increase of the player. This is to provide a continuing challenge to the player. This means that whenever a player levels up:

As you can see in the example figure, the graphs for Rcap is a straight line (constant rating increases per level), but over the whole level span this is segmented. The reason for this is in direct connection with the difficulty of the game on various levels. And game difficulty depends in turn on the various game expansions which were developed for certain level segments.

B-rating and not the cap rating (Rcap) is used in the calculations. This formula can be used to calculate the B-rating from a straight line between two progression points (Lstart,Bstart) - (Lend,Bend) where Lstart <> Lend:

Note for levels higher than 75: B-ratings from in-between points (so excluding start and end) should be rounded to 10s.

This is the curve formula which is used for the rating to percentages conversion:

For percentages in the character panel, you'll need to add 0.0002 to this formula's result to be accurate. It's unknown if this only for display purposes (rounding errors) or if this is used for calculations as well.
The resulting percentage of this formula should be capped by Pcap.

This formula can be used to calculate the required rating for a given percentage:

The resulting rating of this formula should be capped by Rcap.

The cap rating can be calculated by using the rating formula and using the cap percentage as percentage:

Usually, Rcap is equal to B-rating because the Curve Constant is often 1 (Hard-Pcap = Soft-Pcap / 2). Exceptions are mitigations and Critical/Devastating Hit Magnitude.

This formula can be used to calculate the curve constant:

This formula can be used to calculate the optimal rating:

The optimal rating is the rating pivot point where you have the most percentage profit from the curve versus a straight line. For many rating percentages with C=1 this is (SQRT(2)-1)*Rcap.

This table shows all the information which is needed for calculations. For to find the right information row:

Explanation of the columns:

Note: The results of rating penetration effects as exists in T2-5 instances, are not shown in this graph. See Stat Caps for the adjusted rating values.

Note: The results of rating penetration effects as exists in T2-5 instances, are not shown in these graphs. See Stat Caps for the adjusted rating values.

Note: The results of rating penetration effects as exists in T2-5 instances, are not shown in these graphs. See Stat Caps for the adjusted rating values.