"The /loc command has been modified to include the player's server ID and timestamp. Including this information with GM correspondence could help us expedite your request."

"The /loc command has been modified to include the world name."

If a player types "/loc" into chat and hits [Enter] some unusual data appears in the chat window that seems to contain no information about a player location. The intent of this article is to demonstrate how the data that emerges from the “/loc” command can be interpreted, converted into useable coordinates and reconciled against other data sets within the game.

The information presented here represents the best understanding and widest sampling available to the author. Though much data has been collected to support the findings presented here it is impractical to test the presented hypothesis literally everywhere. Input from the community is encouraged and welcomed. This Lorebook entry will be updated as warranted.

In The Lord of the Rings: Online there are two coordinate systems available to the player. The first coordinate system is the one most players are familiar with – it’s the one under the mini-map that shows how far north, south, east or west you are. For the purposes of this Lorebook entry these coordinates will be referred to as “Player Coordinates”. The second set of coordinates are not as visible as the first but are far more accurate – it’s the data you see when you enter “/loc” in the chat window in-game. Since this data also gets submitted with every bug report, this second set of coordinates will be referred to as “Developer Coordinates”. 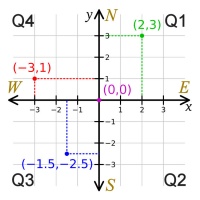 Secondly, it’s also important to understand that most computer-aided design work takes place in quadrant 1. All the values in quadrant 1 are positive and working with positive values is typically easier than not. This is true of many industries that use coordinate systems including; engineering, design, survey. It therefore seems reasonable to assume that the in-game world of LotR:O was also designed in quadrant 1 with positive (and possibly very large) coordinates.

The first term is “r1”. Each iteration of the “r” variable represents a different map that uses the same set of coordinates. The maps don’t exist side-by-side except in a conceptual sense. In fact the maps line up one directly on top of the other. You could think of “r2” being a recycled version of “r1” where they just cleared off the landscape and started over. That’s why some areas of the game share the same coordinates. The brief table below details the known values of "r".

The five remaining terms must be combined in order to reconstruct the X, Y, Z coordinates.

Though the meanings of the "l" and "o" terms can only be guessed at it does seem clear that they serve to distinguish between two different types of data. It appears that the “o” terms represent the base scale (1:1 or the finest definition the game is capable of) whereas the “l” terms serve as modifiers or multipliers to the “o” terms (at 1:20).

The "oz" term is unique in that there is no "lz" term to modify it. The “oz” term appears to vary with elevation and also appears to have no upper or lower bounds. This leads me to believe that Z (elevation) is being reported at scale by the “oz” term.

If “oz” is excluded, an interesting relationship between the “l” and “o” terms can be described. It appears that the “o” terms are always represented as numbers between 0 and 159.99. If you monitor the “ox” term as you walk east you will see that the value rise steadily till it reaches 159.99 at which point it will roll over to 0 and begin increasing again. Furthermore if you watch the “lx” as you walk east you’ll see it increase too, but at a much slower rate. The rate at which they both increase is uniform and directly proportional to each other. In the same distance it takes the “ox” term to increases from 0 to 159.99 the “lx” term will increase by exactly 8.

Because the "o" terms never fall below 0 or rise above 159.99 they can be thought of as existing within a square block that is 160 wide on each side. However, since the "l" term rises or falls at a uniform rate it can be used to "count" the 160x160 blocks. The relationship between the "o" and "l" terms can be thought of as a ratio of 8:160 (or 1:20) and described by the following formulae.

Setting up the formulae and solving for X and Y.

Solve inside the parenthesis.

Note: “INT” is a function available in many languages, software and calculators. The “INT” function turns a value with a decimal into an integer by eliminating the decimal portion of the number. By using the INT function 3.14159265487 becomes 3, 1.61803399 becomes 1, etc.

Do the addition and coordinates emerge.

These are the X, Y coordinates for the hunter port-in spot in Esteldin.

Calculating distances between two sets of coordinates can be accomplished by use of the Pythagorean theorem: A^2 + B^2 = C^2. Consider the following two examples of Developer coordinates. .

To calculate the distance between these two sets of coordinates set up Pythagorean theorem using the derived X and Y values.

Note: "SQR" is another function that finds the square root of a given number.

Substituting the derived values the formula looks like this:

Perform the subtraction inside the parenthesis

Square the result of the subtraction operations inside the parenthesis above.

Perform the addition inside the outer parenthesis.

Finally, find the square root with the "SQR" function.

When the above result is rounded to the nearest whole number it becomes: 8031. 8031 is exactly the same distance reported by the game when two players are grouped with one in each location. The agreement between calculation and obeservation suggests that the original formulae are sound. So, the final formula to calculate the distance between two sets of coordinates looks like this:

Note: "ROUND" is another common function that will round a given decimal number to a specified number of decimal places. In this case the “, 0” at the end tells the "ROUND" command to round the nearest integer and leave no decimal at all.

Not only is one set clearly larger than the other, these sets of coordinates are not even in the same quadrant – remember, “W” and “S” denote negative values. So really, the Player coordinates look more like this.

These numbers represent how far apart the two origins are. In order to begin reconciling the developer coordinates to the player coordinates you must first subtract the values above from any derived X, Y coordinates. This will effectively “line up” the two coordinate systems. Performing this subtraction leaves something like this:

Now that the two coordinate systems are “lined up” the only difference left to account for is scale. A scale factor can be hinted at by dividing the developer coordinates by the player coordinates.

This clearly suggests a scale factor of 200. Dividing both the X and Y terms from the developer coordinates by 200 yields:

NOTE: The “, 1” at the end of the formulae tells the ROUND command to round the answer to 1 decimal place.

Everything discussed so far only applies to the outside world – the landscape. The data returned from the “/loc” command works a little differently when the player is in an interior space. However, there is also a term associated with interior spaces to let players know when they’re in one. An easily accessible example of an interior space is Thorin’s Hall. The reading just outside the entrance to Thorin’s Hall is shown below:

The reading just inside the door to Thorin’s Hall looks like this:

The second data set has some unique features. A few things leap out when you compare the two sets of data.

• The “l” values vary greatly between the two sets.
• There’s a new term: cInside
• There are negative numbers present.

The first point serves to demonstrate that things are not always as they appear. When a player moves through the door to Thorin’s Hall it appears they've traveled only a short distance – from one side of the door to the other. However, the calculations show that the player actually traveled 35040m! That’s a very long way indeed!

The term “cInside” only seems to appear when the player is in an interior space. Furthermore, Developer coordinates are reported differently in interior spaces than they are for the landscape. This leads to the final point.

In an interior space the “o” values are no longer limited to the typical 0-159.99 range but instead can be any number at all. However, the “l” values appear fixed throughout the interior space. It cannot be said that this is the case in literally every interior space but it has been true in all observations to date.

Interestingly, given that the “l” values remain fixed and do not vary throughout the interior space and the "o" values are no longer limited between 0 and 159.99, the previously described formulae still generate a quite useable and contiguous set of coordinates.

There’s one more term players are likely to see and it’s a very straightforward term. The “i” term only appears when you’re in an instance. And the number that follows it represents the number of the instance you’re in. Here are two likely samples:

It is possible for a player to be in an instance whether they are on the landscape or in an interior space. However, being in an instance by itself does not seem to have any impact on the way Developer coordinates are reported.

The “i” term can yield some interesting information though. For example, if players observe the instance number of a particular neighborhood at several times throughout the course of a day they will likely find that the instance number is different every time they check. This suggests that neighborhood instances collapse when empty and are only reinitialized as needed. 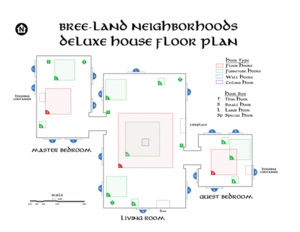 For example, Developer coordinates can be used directly in modern survey techniques to produce a topographic survey. With a large enough data set it would be possible to create a terrain map with elevation lines depicting the relief across the world of middle-earth.

Using the same techniques it is also possible to create an detailed rendering of an interior space like the one at right. These techniques can be used in conjunction with Developer coordinates to accurately map out almost any area of the game.

The floor plan at right is available for download to interested players in a variety of resolutions. Additionally, if the PDF file is printed on 8.5" x 11" paper it should come out to scale.

Additionally, players who are interested in manipulating Developer coordinate data are invited to use a very rudimentary website that can convert raw "/loc" data (copied directly from the game) into a set of coordinates. Players can also use the site to calculate the distance between two lines of "/loc" data.

Warning: The following site is quite primitive.

For a more detailed example of what can be done using Developer coordinates please refer to the images posted in this thread:

Thanks to LotRO Community member Digital_Utopia for pointing out that the first formula was wrong, discovering the blind spot in the heading reporting and for general support during the production of this entry and associated maps.