This page is about the road. For the area in North Downs, see Greenway (Area). 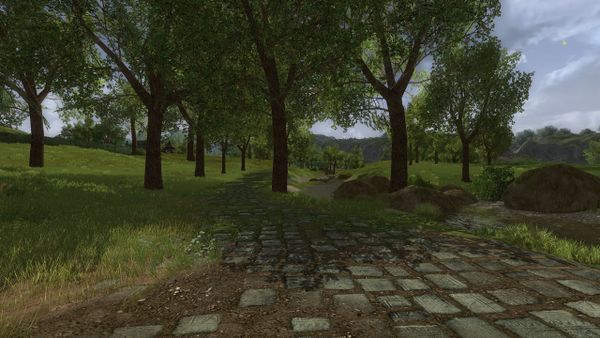 Greenway is a smaller portion of the North-South Road, which runs from Fornost Erain, ancient capital of Arthedain, to Minas Tirith in the far south, the capital of Gondor. Now part of the ancient road is called "the Greenway" as it has long since fallen out of use, and grass has slowly but surely covered most of it, giving its name.

The section of the road that is called "the Greenway" pertains to the area from about Thornley's Work Site in the north, past the Greenway Crossing just west of Bree — the North-South Road's junction with the Great East Road — to the Andrath in the south.

Disused for a thousand years, particularly north of Bree, the Greenway is overgrown with grass and is little travelled except by refugees from the war-torn south. Brigands and ruffians lie in wait alongside the ancient highway waiting to prey on the weak and unguarded. Few now dare the treacherous wilds through which the Road runs. — lorebook