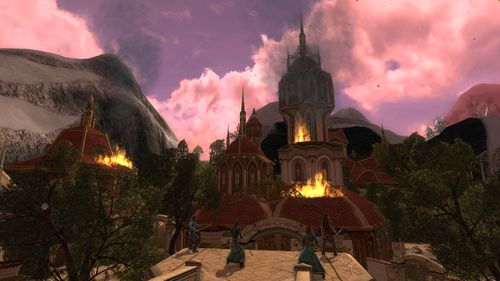 Edhelion was once upon a time the starting location for all elven characters in Lotro, but with the updated and unified introduction quests for dwarves and elves this area is now known as Refuge of Edhelion. Now a new elf character begins the adventure in a quest instance that is set in Edhelion; the city is attacked by Dourhand dwarves and Skorgrím who believes that some relics should give him immortal life. Edhelion is burnt down and ruined. Eventually, about 600 years later, the new elf continues the adventure.

This article is about Edhelion's former glory, when it was the most notable Elven landmark within Ered Luin. Edhelion is never mentioned within Tolkien's writings, hence data and chronology are inferred from the game context. See Refuge of Edhelion for current data.

In the first part of the Elven introductory quests, the new character found herself aiding in the defence of the besieged haven, which is facing the onslaught of an army of Dourhand dwarves allied with servants of the Dark Lord (goblins and trolls), while awaiting assistance from Elrond. At the end of that sequence, the decision is made to abandon the town and let it fade away. The second half of the introductory quests were said to occur six-hundred years later when the new elf returns to the ruins of Edhelion with the sons of Elrond: Elrohir and Elladan. These latter quests were said to take place two years before the Fellowship of the Ring was formed, which would place the fall of Edhelion at roughly TA 2416.

Edhel- is a Sindarin elven prefix meaning "elf" and the -ion suffix generally denotes a son, scion, or descendant. Edhelion could therefore have an implied place-name translation of "Descendants of Elves" or "Sons of Elves," though both are rough translations at best. Edhelion being named in Sindarin represents a possible continuity error in itself, as the only plausible time of its founding would have it populated by Ñoldor, the second tribe of Eldar, all of whom originally spoke the Elven dialect of Quenya. 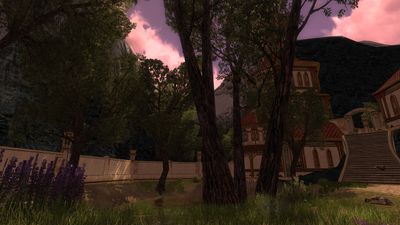 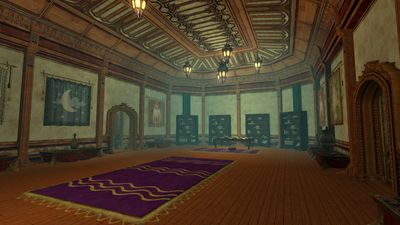 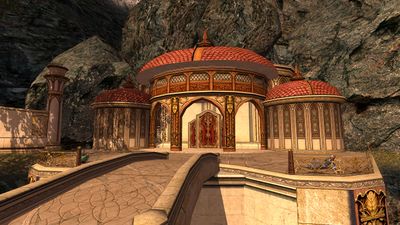