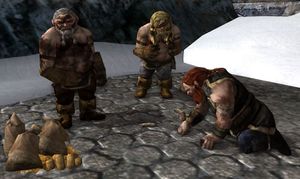 The Dourhand Dwarves were created by the developers of Shadows of Angmar™ from lore briefly touched upon in The Lord of the Rings. Skorgrím Dourhand and his Dourhand clan allows for something that was extremely rare, though not completely unknown in the Books of Tolkien: evil Dwarves.

The Dourhands are descended from an ancient dwarf-kingdom of the Blue Mountains, a realm that has long since fallen into ruin. They became scattered and declined in number, but poverty and dishonour bred within them a great greed and lust for power.

When the Elves of Mithlond founded the refuge of Edhelion, in the Blue Mountains, Skorgrím sought to rob them of their relics and treasures. He rallied the remnants of his people and laid siege to Edhelion. Worse yet, he had paid Goblins and Trolls to assist him . . . something of which no honourable Dwarf would conceive. His evil ways brought him to ruin, though Edhelion was also lost.

Six hundred years later, a Gaunt-lord, a vile necromancer from the First Age, summoned a fell spirit which entered the preserved corpse of Skorgrím and raised it as a wight. The dark realm of Angmar used this creature to turn the Dourhands entirely to evil, leading them to believe that the creature was indeed Skorgrím reborn, to lead them to wealth and glory. Now the Dourhands serve Angmar, under the rule of the creature they know as Skorgrim.

The Dourhand dwarves appear to have turned their backs on the Free Peoples of Middle-earth and rebelled against the rightful rule of Durin's Folk but seem to have many strongholds and encampments throughout Eriador. Elf, Dwarf and Hobbit players will meet these evil dwarves early in their careers and continue to fight against them as they progress through their career adventuring throughout various regions of the world.