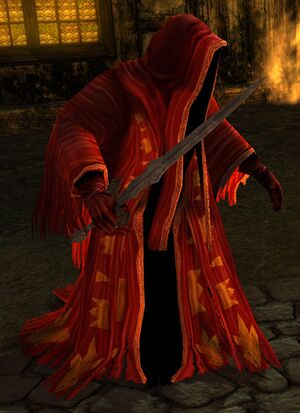 Cargûl (meaning "Red Wraith")[note 1] are lesser wraiths enslaved by the Nazgûl. Most are likely victims of the Nazgûl's Morgul-blades, a terrifying supernatural weapon that saps a person's life. Those wounded by a Morgul-blade will find themselves fading from the mortal world and drawn into the wraith-world, a spiritual plane just beyond our perception of reality.[1][2] Once the transition is complete, the person is transformed into a wraith and, like the Nazgûl themselves, is invisible to mortal eyes, save for whatever they are wearing or carrying. The Cargûl are hapless souls that have fallen victim to this calamity.[3] Frodo Baggins nearly succumbs to this condition himself when he is stabbed by the Witch-king at Weathertop.[1][note 2]

Some of the Cargûl were once knights of Eärnur who accompanied him when he went to Minas Morgul to challenge the Witch-king. Orolang is one of these,[4] and it was rumoured that the Cargûl of Dol Guldur were also among Eärnur's company.[5][6] However not all Cargûl share this origin. Not only are there many more Cargûl in the world than the "small escort of knights" Eärnur brought,[7] but there is an observed case of a newly-transformed wraith joining their ranks.[3] Most Cargûl wear scarlet robes with a golden pattern, though a grey robe with red gloves is also common. Some wear a black robe with a red cowl. They do not typically carry Morgul-blades themselves,[5] though they have been known to be involved in their creation.[8]

Many other wraiths found in Middle-earth are likely Cargûl, but the above have been specifically identified as such. Other wraiths, including Lúmithil and the four wraiths of Fornost, are known to have been transformed by Morgul-blades but are not identified as Cargûl.