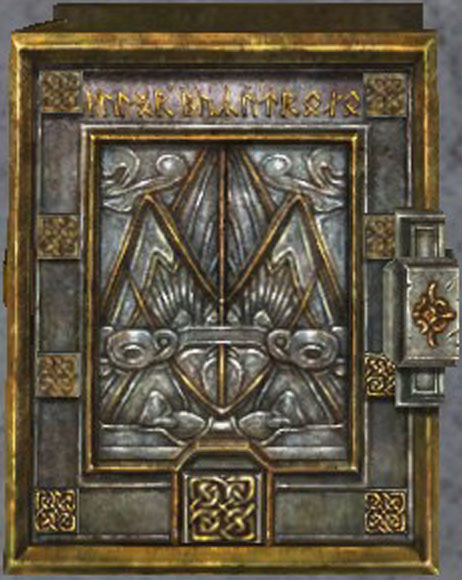 As you can see, the runes were rather difficult to make out. The first word was especially hard to read. Fortunately, by enlarging the photos I was able to decipher them. As with most of the runes in Moria, these are Angerthas Moria. As you can see the runes spell out "Katûb Mazarbulu". The second word is instantly recognizable and means, "of Mazarbul". Just as with the inscription on Balin's tomb (uzbad khazaddûmu ~ lord of Moria), the -u ending means "of". Although it does not seem to appear in any Khuzdul word list that I know of, the first word, "Katûb", must clearly mean "Book". I can only conclude that this is a Neo-Khuzdul word construced by Turbine for their use in Moria.

Aside from this obvious example, the translation of "Katûb" as book is further attested to by its use throughout Moria. There are several place names containing this word, such as "Mezel-katub" and "Katub-zahar". Each of these are the names of places that appear to be libraries or archives. Indeed, I believe the name "Katub-zahar" very nearly means "library". We know from the Dwarvish name of Nogrod, Tumunzahar (or "Hollowbold"), that "zahar" means "bold" or "building". Thus, "Katub-zahar" would appear to mean literally "Book-building" or more figuratively, "library".