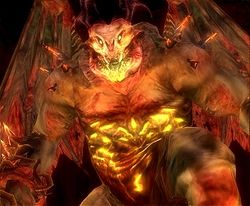 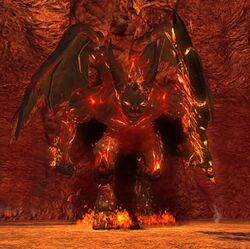 A Balrog (pl. Belryg) (Sindarin for Demon of Might) is a very powerful demon of shadow and flame.
Balrogath (Balrog-kind) are remnants of the War of the Jewels in the First Age. They were originally Maiar that entered into Morgoth's service, and quickly became his most feared force. Little is known of their numbers, but Tolkien once said that there were "certainly no more than seven." Of these, only their captain is given a name by Tolkien: Gothmog. However, the Balrog of Moria was often called Durin's Bane, in reference to the great dwarf-king Durin who ruled in Moria at the time of the monster's awakening. However many there once were, there have been three killed: an unnamed Balrog by Glorfindel and Gothmog by Ecthelion of the Fountain at the fall of Gondolin, and Durin's Bane by Gandalf in Moria at the time of the War of the Ring. In each case, both combatants perished.

Belryg are a variety of the Nameless specie, of the Ancient Evil genus.

The End of Beta

During "End of Beta" "celebrations" which mark the end of the Beta Test period for major Expansions, both Durin's Bane and Thaurlach are "resurrected" by the "Devs" to harass players in Bree, Thorin's Hall and whatever the "new area" happens to be -- frequently in multiples incarnations!

These incarnations are always quite interesting encounters as Durin's Bane has a "dieing AOE" which tends to kill off any player characters within visible range!