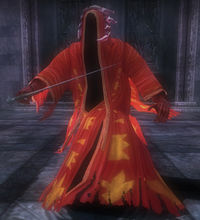 Wraiths are ghostly beings that existed more in the hidden Wraith-world than our own. The most famous of these were the Ring-wraiths, Men ensnared by Sauron's Nine Rings, but their victims, too, were transformed into wraiths.

Neither living nor dead, wraiths linger in Middle-earth in a state halfway between. As such, they are classified as creatures of the Unseen, as opposed to the Seen or living world. Their physical bodies have withered and faded while their spirits endure. This leaves them invisible to mortal eyes, save for their clothing and any objects they carry. While the Ring-wraiths were drawn into the Unseen world by their Rings of Power, other lesser wraiths have been transformed by wounds from a Morgul-blade, the Ring-wraiths' powerful supernatural weapon. No matter their origin, all are slaves to the will of the Dark Lord and are among the most terrifying of his servants.

Wraiths include the Nazgûl and their lesser minions the Cargûl. They are seldom seen but are mostly found in Angmar, Mordor and other areas in the south affected by the war. They are at least Elite and always aggressive. They are weak to Light and Westernesse damage and resistant to Common damage. They typically utilize Shadow damage, fear effects, and dread.