This page is about the lesser watching-stones. For the stronger stones, see Ancient Watching-stone. 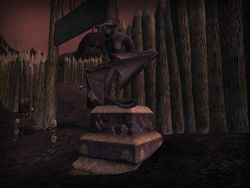 Watching-stones, also known simply as Watchers, are statues inhabited by Fell-spirits summoned from the Void by the Dark Lord. They thus have a sinister intelligence of their own and are posted as guardians near fortresses and towers. Although inanimate, Watching-stones give off an aura of dread that affects all nearby, draining their hope and life force. To stand near them too long can prove fatal.

The most famous Watching-stones are the Two Watchers posted outside the tower of Cirith Ungol in Mordor. However, Watching-stones are used at many of the Enemy's strongholds, including those in Angmar and Mirkwood. A line of Watching-stones forms a border between western and eastern Angmar in the area known as Rammas Deluon. Adventurers must complete a quest to master the Watching-stones before they can pass into East Angmar.

Throughout Eriador and Mirkwood all Watching-stones appear in the form of the same unnamed creatures. Throughout Mordor many more Watching-stones appear in different shapes and sizes, some in the form of known creatures such as the Fell Beasts or the Balrogs, while others are in the shapes of yet other nameless creatures. Several Watching-Stones are found to contain Fell-spirits inside, while others are implied to be the spirits of mortal men, trapped in the stone by the evil sorcery.[1][2] Many Watching-stones in Mordor seek to communicate with the adventurer, showing them visions and demanding certain tasks to be perfromed. The one named Zaghárog even provides valuable information in return.[3]

The Two Watchers are the only possessed statues that play a part in The Lord of the Rings but presumably, the Dark Lord had other such spirits under his command.