Personality Description: Often depressed because his childhood friend Shana's father refused to allow them to wed.

I am the only son of Turambar, a descendant of the warrior Dunedain of Cardolan. My father was one of the few survivors of the floods of Tharbad in 2912. My father wandered north until he encounted the Dunedain remnant of the kingdom of Arthedain. There he married my mother, Findulas. I was born on the 27th of Ringare, 2996. My parent's marriage was one of lust and not of love and it ended before I reached manhood.

As a lad I traveled to Gondor with my father. he entered the service of Angbor, Lord of Lamedon. I was raised along side his daughter Shana. We were the only children near each other's age, in the house of Lord Angbor. We often got it trouble together, sought adventure together and even studied together. We were inseparable as children. As we grew up together, we developed a bond and eventually fell in love. It was a love that was never fully realized until I entered the service of Gondor's rangers. In Ithilien, I realized how much I wanted to just simply talk with Shana, but I was honor bound to my post, for two long years. Upon my return to Lord Angbor's home I confessed my love for her. She was overjoyed upon hearing my confession,and by oaths, we bound our fates together. These precious oath's were etched onto a beautiful horn she had crafted herself and gifted to me on the day I left to join the rangers of Gondor. The very horn I still bear before my breast, to this very day. It turned out that my absence had caused her to realize how much she loved me. Much had changed in my absence though, Shana had blossomed into a well mannered, courtly and beautiful young woman. My liege, Lord Angbor, was not pleased by our love and he exiled me from his lands. He bid me to forget about his daughter, who was stationed above my reach.

Without Shana, I lost my will to live and wandered aimlessly till I met a wandering sage named Nuria. With her quick wit, tricks and smile she cured me of my sorrows. Now we travel the land, together. healing other's woes and battling evil wherever it may lie. We also bring song and dance to all corners of Eriador, to help its inhabitants remember less trying times.

I found that my feet crossed roads that I had traveled in years beyond the remembrance of yesteryear. They carried me albeit knowingly to the lands of my birth. The secrets I uncovered there, did nothing to ease my woes. My mother Findulas who I had hoped, might provide some solace for my loss had died the winter after me and my father departed. The legacy she left me was a prophesy that not even my father had dared to tell me. At my birth, my death had been prophesied. It was an ill-fate, to have a fey for my destiny. I am fated to die in a hopeless, battle defending all that I hold dear. My valiant efforts will be for not, I will succumb to my wounds and depart this mortal shell. All that I hold dear will perish and my death will be a harbinger of the end of an age.

Yet, the knowledge of my feyness has caused me to be gain more fervour in my quest to aid others. I may lose all I hold dear, but through my efforts perhaps other shall be able to keep what they hold dear. I am ardent in the pursuit of this goal. I will hold no glory for myself, but I will lift up others. I will not perish in a blaze of glory, but in a slow controlled burn as my spirit slowly leaves these mortal lands.

This goal, is very difficult for me to pursue. I sometimes feel that I should use my time, remaining in pursuit of my own desires. Indeed, some days, I lie awake at night wishing that it were Shana lying at my side, battling the foul forces of this world with me, but it would be a cruel fate to force my Fey upon someone like her, who is not doomed to death! I want to believe she is safe in the care of a Gondorian nobleman somewhere and through my efforts she will never have to know the hardships of battle. For her sake I will fight the good fight, and carry the torch of my soul aloft, in defense of all people, until I smitten by my fey.

I shall be known as Euthurin Fey, Crosser of Roads, until the hour I meet my long foreseen doom!

Minions of the Great Eye

Bearer's of the White Hand of Saruman 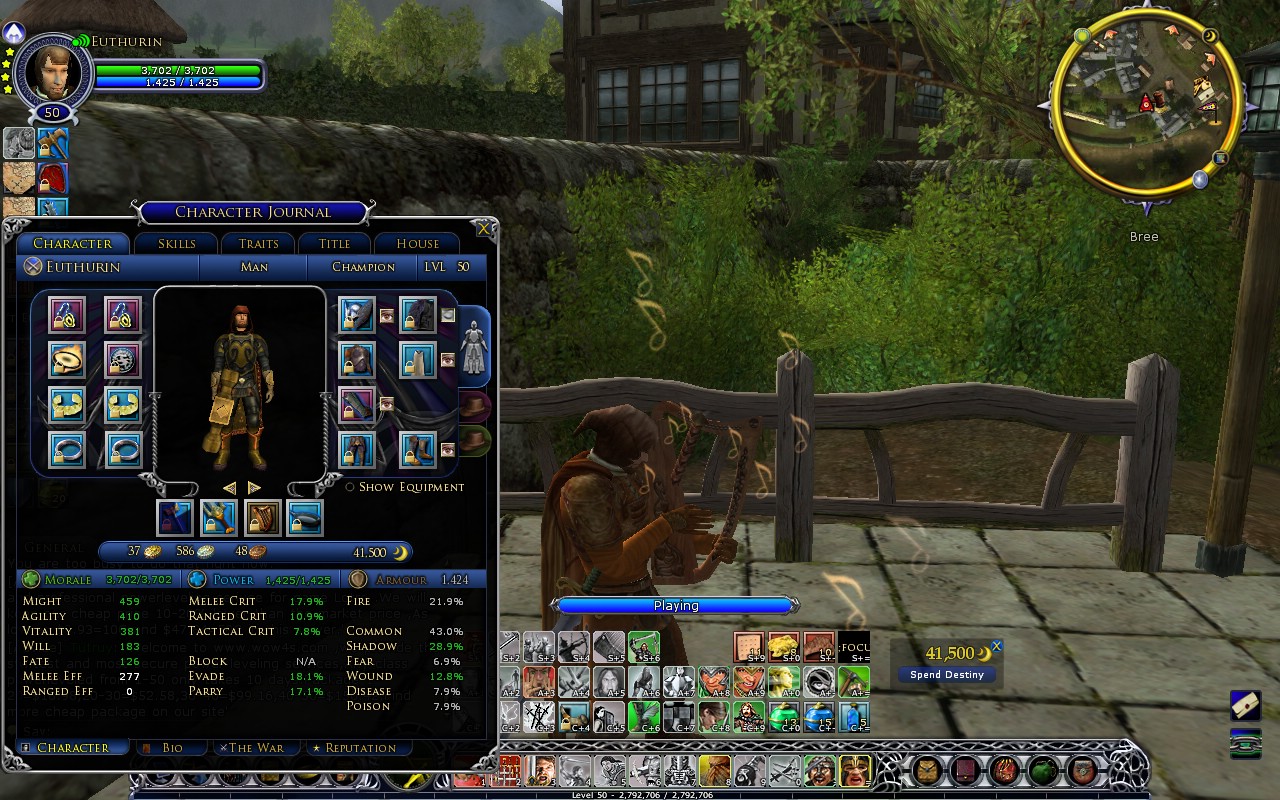 Cut, that orc down! He's their leader, if we strike him down they will flee in terror! Smite him!

Nothing is better, than enjoying the sunset with a pipe in one hand an a pint in the other. Especially, after a good meal. The company is a little lacking though.

For my ancestors! The Warrior Dunedain of Cardolan! You shall perish.

With the Strength akin to that of Tulkas, I will smite thee!

The harp soothes the soul and more than a good nights rest.