Here are the Release Notes for Update 20, released on Tuesday, March 21st. 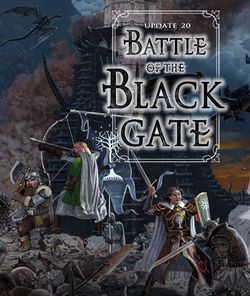 Journey through The Wastes!

Update 20, The Battle of the Black Gate, features more than ninety quests in three new regions: the Noman-lands, Dagorlad, and the Slag-hills. Discover new adventures beginning in the Camp of the Host.

Epic Volume IV, Book 8 is now available. Experience the Host of the West’s climactic confrontation with Sauron’s forces at the Battle of the Black Gate, as Aragorn seeks to draw Sauron’s Eye away from his true peril…

Two new dungeons are now available! Explore Carchost, the Towers of the Teeth and Skoironk, the Maggot-holes, each with its own landscape, solo resource instance, and group resource instance.

Prepare the Host of the West for Battle!

Players can acquire supplies, provisions, and armour to prepare the Host of the West for the Battle of the Black Gate! Collect enough items to assist each faction of the Host of the West, and receive unique rewards. Supplies, provisions and armour can be earned through solo and group resource dungeons, Roving Threats, Landscape monsters, and Crafting.

Dyes - "Dark Purple" and "Deep Purple" were used in different places to refer to the same colour. All references to this colour have been unified to "Dark Purple."