might be a good idea to organize if we place any marks like places of interest, stables and trainers on map or not?

Hinney: Is there a way to get in-game coordinates? That would be the easiest method. You can list the point of interest, reason why it's interesting and the in-game map coordinates.

You could go to a location and enter /loc

The best way I've found to get location info is to use ;loc. It gives you a little more concise listing than /loc. But it puts it out in chat, so don't use it around other people. Or you can whisper it to yourself.

I have a listing of various locations throughout the game. I was going to add the location info to them, but I haven't gotten around to it yet. Skeeve 11:08, 4 March 2007 (PST)

Also we may want a newer image of the Breeland map. The one there now has the Filter Map Notes dropdown menu on the picture. Not a huge deal, but it would be good to be consistent.

Also, do we want to add maps that aren't explored yet? I think it is good to have them all, but will someone remember to come back and upload the fully explored version? Skeeve 11:22, 4 March 2007 (PST)

When i first saw the maps page only bree en eriador were uploaded. So i uploaded all the other maps. Since i'm an elfhunter i could only help with the ered luin map. If someone has a map that got content please upload them. I'm currently not exploring anymore since i get killed very easely in the wild. I'm not supposed to be at that location with my level. I'm entering all the questdata first. --Blakborn 12:20, 4 March 2007 (PST)

Maps and Not Maps

Rencently User:Magill did a great overhaul of Maps and removed categories that filled no purpose. Thanks.
Today User:EoD removed a POI map from here and I believe that was the right thing to do.

How to deal with POI-maps then? And maps for let's say dungeons or other interiors?
I suggest they are categorized under the "Category:REGION Maps" they pertain to. That way they are categorized, and so in the most narrow scope. I doubt we need a certain category for dungeon maps as the dungeon itself will use the map, and they are also then found under the regional category.

But how to deal with area maps, if they exist? (Or sub-areas, such as for Moria?)
They should go in here in their clean version as they are also used for other reasons.

Turbine has changed their "map standards," both recently and over time. After the "Fog of War" was removed, people complained they couldn't tell where they had been. Now, at least with Great River, there are no POI flags until you visit them. AND, those POI flags in the Great River match those for the various Explorer deeds. (And if you mouse over them, they give you the name and coordinates, which I think also is new.) In the past, at least during the betas, folks have bugged the fact that the places for the explorer deeds did not show up as POI flags.

Personally, I rely on the Dynamic Maps to find things where I haven't been. Much easier to use than the Lorebook, which is far from complete. Wm Magill - Valamar - OTG/OTC (talk) 16:59, 3 April 2012 (EDT)

From Caabal78 on the reddit/lotro Forums: Note that this map describes Middle Earth as of Update 20. 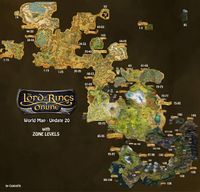 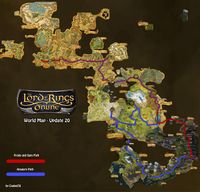 A description of WHERE actual areas exist on Maps.