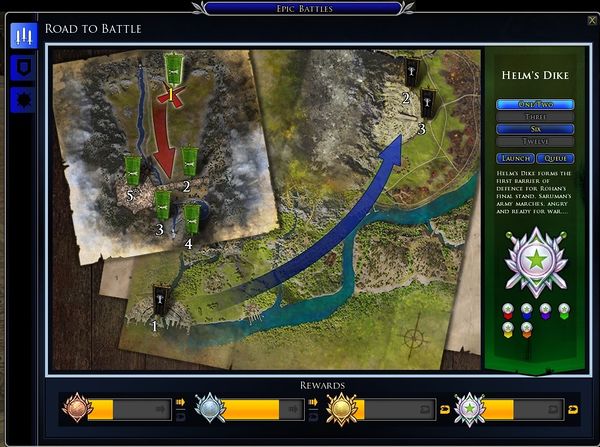 The Road to Battle

Main article: Epic Battles
The Road to Battle is a map with numbers indicating the steps and phases of the Defence of Rohan and the War for Gondor. Once you’ve selected the battle you wish to partake, the right panel will update with the name of the instance, the group sizes available, a description of the encounter, and a visual display of the best medal you have earned on each of the quests and objectives that can be found within.

Selecting 'Launch' will send you into the instance immediately, while 'Queue' will enter you into the Instance Finder queue to find a group to play with. All Epic Battles solo spaces allow for two players to play them together, without an increase in the difficulty of the instance. We encourage you to find a friend and play together.

Mousing over various areas of the map will generate "Tool Tips" with details of the objectives. Those aspects of the battle which cause loss of "Merit" 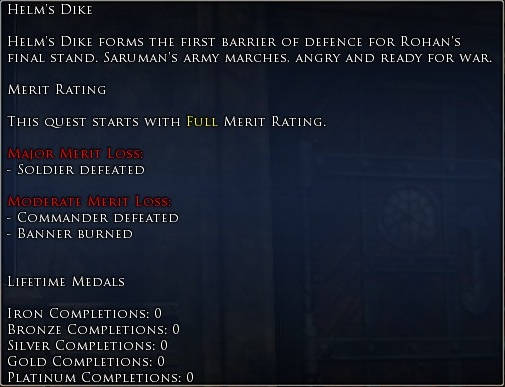 Mousing over the Map in the middle will provide the overview.

Each Medal outline describes an objective in the respective instance. These Medal outlines match those on the Battle History panel and will fill in once you have completed the objective. As a battle ebbs and flows, you may be presented with optional side Objectives. These are not necessary for victory but completing them successfully will add to the merit you earn in the battle as a measure of the victory.