A ring of (typically) white stones found near most settlements that serve as a place to retreat if a character is defeated.
In the case of Instance play, the Rally Point will usually be just inside the beginning of the Instance. This allows play to continue within the Instance.
Certain "gated" areas (usually quest related), which appear to be instances will actually place a character at a Rally point near the quest-giver, rather than inside the instance. Defeat in these situations normally results in failure of the quest and require that you re-visit the original quest-giver to try the quest again. 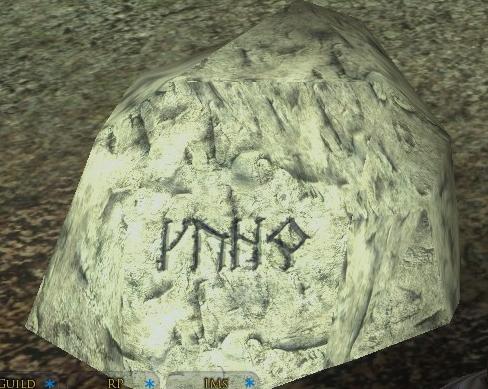 This one appears to say CAEW, which is Sindarin for Resting Place

All 4 runes are part of Tolkien's Cirth. These runes belong to the alphabet known as Angerthas Daeron and are the runes used to represent Sindarin. The runes in the picture translate as "kaew":

The runic 'k' is actually meant to represent a Sindarin 'c', however the elvish 'c' is almost always pronounced as a 'k'. With this in mind, the letters "kaew" would actually appear in Sindarin as "caew". So, what does this mean?

Well, "caew" can be used to refer to a resting-place, which seems particularly apt given that the stone circle is where you go to rest after retreating from battle.

Although it is likely just a coincidence, I have also noticed that if you take the phonetic representation of this word ("kaew") and read it backwards, you get "weak", which is exactly what you are after retreating.