* With the release of ROI Update 5, in December 2011, Turbine included a Lua Plugin Manager on the Character selection page (for both Freeps and Creeps). With this very visible addition, Turbine Support of Lua plugins is more assured into the future.

The Turbine Plugin Manager allows you to preform several different Lua Plugin management functions both before you launch a character and then in-game.

1- It allows you to define which plugins you would like to have load automatically, and for which character(s), each time you log-in.

When you highlight (select) a plugin in the left column, you can select the individual character(s) or "All Characters", via the drop-down menu at the lower right: "Automatically Load for:"

The command: "/shortcut 13 /plugins load Manager," will create a command shortcut to load the "classic" plugin manager "PluginManager," by Shady (Cearbhall), into "Quick Slot 13", when the shortcut is clicked in-game. (www.lotrointerface.com/downloads/info379-PluginManager.html).
You then use "Manager" to load the remaining plugins which have not been "re-coded," as has been done in the past.

2- In-game, you can immediately load individual plugins, as with the "/plugins load <plugin>" command.

Select the plugin you wish to load; click the "Load" button at the top of the screen.

3- In-game, you can immediately unload all loaded plugins, as with the "/plugins unload" command. It is not possible to unload individual plugins.

Plugin messages are "Standard" messages and require the "chat filter" "standard" to be selected. (System defaults.) Actions by the Turbine Pluagin Manager are not echoed in the chat window.

Note that using neither "Load" nor the "Unload all" button in the Turbine Plugin Manager will display any messages in the chat window unless the plugin was previously loaded by the Turbine Plugin Manager. And then only messages provided by the Plugin Author are displayed. (It does not display the "All plugins have been unloaded" message seen with use of the /plugins command.) 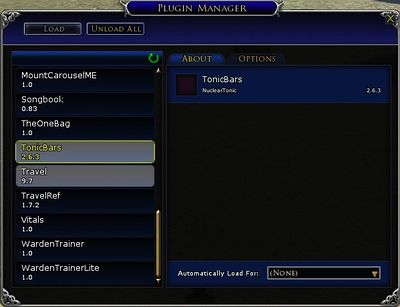 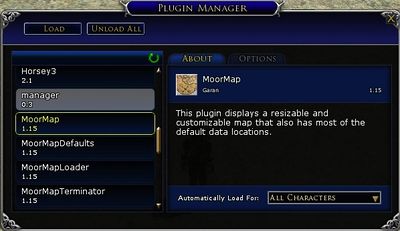 The Turbine Plugin Manager with options

There are multiple ways to access the Turbine Plugin Manager.

1- During Character Selection, you can open the "Plugin Manager" by simply clicking on the “Manage Plugins” button on the right, below the "Monster Play" button.

2- You can also access the manager when in-game (logged in and playing a character) via a start menu entry under the System sub-menu for both normal characters and monster play characters.

at the extreme left of the "Game Control Bar." On the resulting pop-up, select "System at the very top. "Plugin Manager" appears as the third entry

4- And finally, you can assign a "Toolbar slot" to the Plugin Manager. Select Options --> UI Settings; then pick a Toolbar Slot and use the pop-up menu to select the "Plugin Manager"

If you just added a Plugin to your system while "in-game," (via LOTRO Plugin Compendium (LPC) or Minion + LotROnion for example), the Plugin Manager doesn't know about it yet.

The Plugins folder is only scanned when the Client is launched. Should you add plugins while the client is running, you can refresh the view of available plugins found in the Plugins folder on the disk with the "/plugins refresh" command. Or, near the top in the center of the Plugin Manager display, is a small circular, green arrow. Clicking this will refresh the list of Plugins visible to the Manager.