Note: This page contains special characters. Without proper rendering support, you may see question marks, boxes, or other symbols. 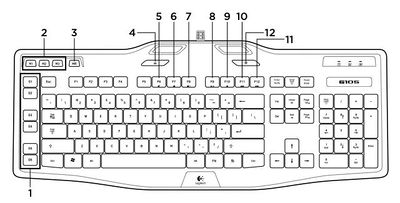 Disables/enables the Windows/Context Menu keys so you won’t activate these Windows features by accident during a game.

This explanation may convey meaning to Windows (PC) users, but is meaningless to OSX (Mac) users.

In fact, this switch is very important to Mac users but the implications of its actions are VERY different.
Any time this switch is activated, ANY use of the "Windows Key" or "Menu Key" is disabled all the time -- no matter what application, game or not, is running!

When this switch is depressed (i.e. illuminated), this key-stroke is NOT available to ANY OSX Application! (I.e the key press is not delivered to the application having keyboard focus.)

Consequently, shortcuts such as ⌘-q do nothing!

This will display ⌨ in the upper right side of the menu bar.

A right click on this icon (⌨) will display a pop-up menu, select "Show Keyboard Viewer" and a view of a keyboard will be displayed on your screen.
This display will highlight any key which is depressed on your keyboard, allowing you to determine which keys produce which values.

Pressing the "FN" (Function) key (to the right of the space bar on the G105) and F6 - F12 perform audio manipulation actions - in applications such as iTunes/DvD player, etc.