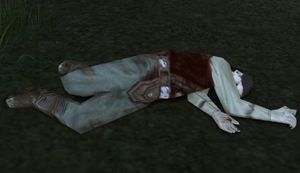 I cannot believe my find today! Here I am digging for those roots mother makes into that disgusting stew, and I came across that dagger. Time and rust has eaten away at it, but I can tell it was once a magnificent weapon! I wonder if there are more out there. Maybe my luck is starting to turn.

I brought my find to Newbold the other day, and he thinks it may have once been buried in one of the barrows west of Bree. I wonder what else might be found out there?

Amlach and I are going to enter the Barrow-downs and dig for more treasures! It was not easy to get him to come along, but finally I convinced him that those old tales about Barrow-downs are just old wives' tales. There is not any evil out there. What harm can old bones do to a living man?

I was looking at an old map Newbold gave me to see where to dig, and I had the strange feeling when I looked at the southern section. Newbold's map simply called it, "The Southern Barrows."

There are treasures there, I am sure of it. Amlach and I will leave soon.

We have arrived at the barrow, and I cannot wait to begin digging. I am sure we will find something that will make us rich! Never again will we have to eat that disgusting root stew Mother makes!

Amlach is concerned. He says something does not feel right, but he is being a fool. There is nothing to fear here!

(The next journal entries are undated written in a different hand)

Malin is gone. He must have ventured further into the downs. I fear for my brother. This place has a foul feel and a queer calm about it. I will make camp here for the night and search for Malin on the morrow. A chill wind has brought mists so thick even the lights of Bree are nearly drowned in it.

Hopefully by tomorrow the mists will have cleared enough for me to try and follow my brother's path. I will not rest until he is found.

Malin...I have seen him! After a long trek into the Downs, I was sure I heard him calling to me! I crested a hill, and at its feet was an evil looking mire. Above the mire there was a barrow encircled by standing stones. Even as I gazed upon it, mists swirled about, and I could hear my brother clearly as if he were standing next to me!

If not for those accursed mists, I would have found him, but a feeling of dread come over me, and the voice of my brother fell away. At least I know he still lives! The mists began to close around me, and it was all I could do to make it back to my camp before I was fully entrapped in them. I will return for my brother on the morrow.

(This page is covered in dirt. Scrawled across this page are a few words, apparently written in blood.)