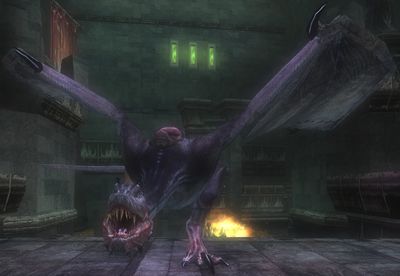 Fell Beasts, also called fell-beasts or fellbeasts, are a species of Ancient Evil.

These winged creatures serve as steeds for high-ranking wraiths, particularly the Nazgûl. Their true name, if they have one, is unknown, so they are commonly referred to merely as "fell beast". This is sometimes spelt "fell-beast" or "fellbeast" to distinguish them from other beasts that are fell. Beregond of Gondor once referred to them as "hell-hawks", but that term does not seem to be commonly used.[1][note 1]

The fell beasts resemble huge featherless birds with long necks, sharp teeth, and wings formed from a membrane of skin between horned fingers, similar to a bat or drake. They also give off a terrible stench.[2][3] They are sometimes mistaken for Dragon-kind,[note 2] whom they superficially resemble, though it is unknown if they are related to them or to natural beasts. They are believed to be the last remnants of creatures from an earlier era, raised by Sauron as steeds for his most fearsome servants.[3] Therefore, they are classified as Ancient Evil.

Fell beasts are most often seen being ridden by the Nazgûl or flying high in the sky around Dol Guldur. Other wraiths known to have a fell beast in their service include Mordirith and Uluithiad. In addition to allowing their riders to travel far and see much of the land below, these creatures are also used as weapons of terror. In battle, the cries of both the fell beasts and the wraiths riding them are used to demoralize their enemies, and they pose a more direct threat by snatching unlucky individuals and dropping them from high above.[4][5] However, lengthy combat encounters with fell beasts are rare.

Locations where fell beasts can be found include:

Fell beasts do not appear as standard enemies but rather as special encounters such as Scourges and enemies in instances. Thus, their Difficulty rating and abilities vary. However, they tend to deal Common damage with standard attacks and have Shadow damage and Fear-based special abilities. Some are known to inflict Mortal Terror on their victims and cause them to go Running Scared.

Like most other Ancient Evil creatures, they are weakest to Beleriand damage and somewhat vulnerable to the Light, Ancient Dwarf-make, and Westernesse damage types. They are of vicious temperament and loyal to the Dark Lord and his most dreadful servants, and therefore are considered Evil in alignment.

All catalogued fell beasts that can be engaged in combat: