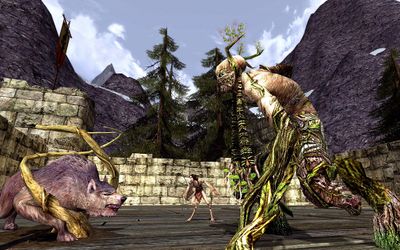 There are four outposts in the Ettenmoors, which can be captured by the Army of Angmar or the Coldfells Army.

With the Riders of Rohan expansion, the locations of the Isendeep Outpost and Arador's End Outpost were moved (the Hithlad Outpost was added as a new outpost) and the following outposts were removed:

All outposts "begin" under the control of Gaergoth the Unbound ’s forces from within the Delving of Frór. These forces will randomly reclaim those outposts.

When captured, the location becomes the province of the controlling force for a period of six hours. At the end of this time the outpost is returned to neutral control under the forces of the Rogmul Gaergoth the Unbound .

River Outpost and Arador's End Outpost are guarded by patrolling NPCs of the side who controls the outpost. The Hithlad Outpost and Isendeep Outpost are guarded by the same patrolling NPCs but also stationary guards at either side of the entrance. Unstealthed, it is thus impossible to enter Hithlad Outpost or Isendeep Outpost (while controlled by the other side) without entering combat. It is possible to get inside River Outpost and Arador's End Outpost by slipping past the guards as there will be a time, during the NPC patrol, that the door is left unguarded.

At the back of all outposts, there is a 'Back Door' that leads to the Delving of Frór. Each outpost is assigned an area within the Delving. The guards there change according to the side the Outpost is under the control of.