From Lotro-Wiki.com
(Redirected from The Rift)
Jump to navigation Jump to search 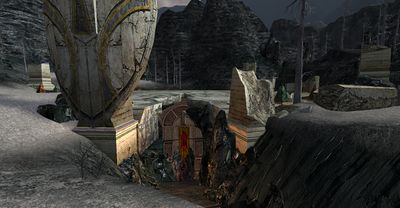 During the First Age, a mighty city once stood. Eventually, it fell into ruin, and was lost until the Fire-giants (or Eldgang as they call themselves) found and later inhabited this underground lair. It was known in the Black Speech as the Rift of Nûrz Ghâshu (Angry Fires).

The entrance is located in the far north-east corner of Angmar, beyond the Gate of Gath Uior [9.2N, 19.6W]. There is a friendly ranger outpost with a campfire for Hunters called Iorelen's Camp [10.8N, 15.5W] a little to the south-west of the entrance.

This raid has a raid lock which resets twice per week:

The following deeds can be obtained in this region:

Master's Command, the former making his attacks cause greater damage, and the latter causing him to attack targets at random. It is believed that the Troll-keeper also heals the Troll. For these reasons, the Troll-keeper should always be taken down first. Keep the Troll near the Keeper or he will begin to make more powerful attacks.

Alternately, mesmerize the Slave Master, and have everyone gather as closely as possible on the Slave and focus all fire on her. The Hillmen Guard will all then be in close enough proximity to receive the Blood Pact damage that the Slave absorbs. Finish the Slave once the Guards are down, then finish with the Slave Master. Very fast and effective!

Take care when proceeding onto the islands in the lava. Stay on the right-side of the path to avoid two of the Fumaroles. When a Fumarole pops up, focus all DPS on taking it down. A few Searing Úrfon may spawn while the Fumarole is up, but this can be significantly reduced or even entirely prevented by Champions using Clobber (Fumaroles are immune to Burglar's Addle). The Úrfon deal about 150 Fire damage with their attack, and reflect an equal amount of damage received back at their attackers, making them difficult to defeat. Good ways to deal with them are to either single-target DPS them down or ignore them, as they will not attack and de-spawn after about 30 seconds if they are not attacked. Ghâshfra orcs will come running in in clusters of three. Mezz the ranged orcs while the current Fumarole is active, then take the orcs down with ranged damage or line-of-sight them in close so that more Fumaroles aren't spawned before the raid is ready. 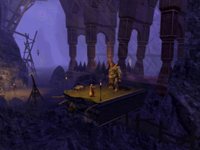 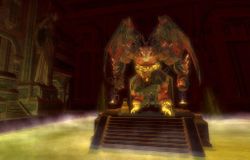 Three giants and a bartering vendor

You will run into these giants just beyond the portal that Asmólf opened up. They might be in combat with a group of Ghâshfra Butchers, in which case you can help them out a little if you want. Just make sure that the Butchers remain aggro'd on the giants, who can easily handle them. Once they are down, grab all the quests from the giants and exchange obsidian rocks for Rift Coins. Soon another wave of Butchers will come running. Do not engage them in battle; instead let the giants take care of them.

Once he is down, proceed through the tunnels until you get to Zogtark. Clear out the entire area of mobs before moving in on his Elder Drakes.

When Zogtark is defeated, head through the gate that the Elder Drakes guarded.

This can be a very tricky area. There are three islands with four Fumaroles on the first, one on the next and one on the last. Do not rush onto the islands. The trick is to stick in a tight group and move forward slowly until finding a Fumarole. Once you do, don't move. Lay as much damage as you can on it, and make sure that classes with interrupt abilities such as Clobber use them as much as possible. This will prevent Searing Urfons from spawning. Once the Fumarole is down, move slowly forwards until you find the next one and repeat the process. More information on dealing with the adds can be found in the Mobs section above.

After the Fumaroles you will encounter Narnûlubat. He is standing in front of the Ever-Seer, who leaves once the fight begins. 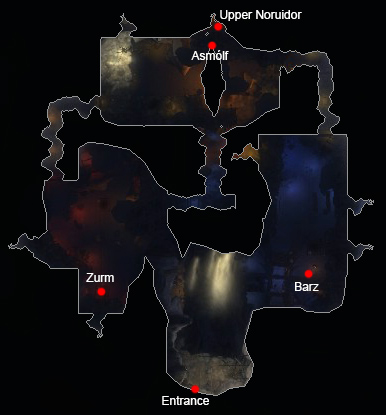 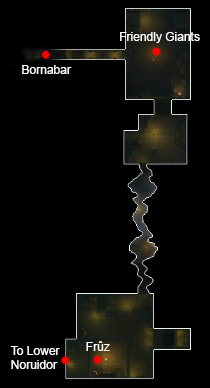 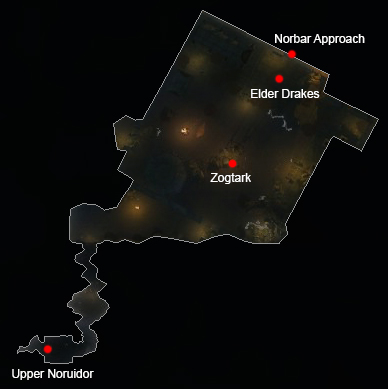 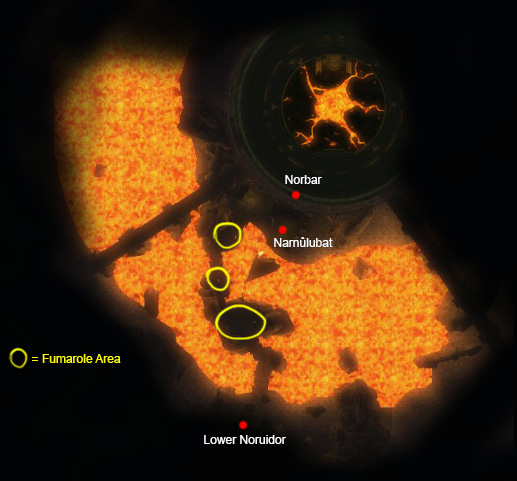 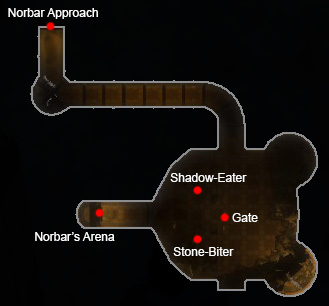 This 12 player raid instance features a set of unique boss-drop barter items that can be turned in for incomparable-quality class gear. One unique barter item exists for each of the weapons and armor pieces regardless of class, which means that all of the players will have to roll on the same barter items. Since each boss drops the same barter item(s) each time, some pieces of the set will be harder to obtain. For a complete list of bartering vendors and set pieces for the Rift, click here.

In your journeys of The Rift you'll find

Scraps of Rift-iron Ore. These can be used to barter with the Fire-giants (Eldgang) for

Rift-iron Coins. The giants are found in Upper Noruidor, the area after Bornabar with Barz and Zurm. 3 Obsidian Rock Shards or 5 Scraps of Rift-Iron Ores can be exchanged for 1 Rift-iron Coin. The coins can be used to barter with the Rangers at Iorelen's Camp [10.8N, 15.5W] for mini-sets and consumables.

For a display of all armour set cosmetics for the armour from this raid, see Armour Set Cosmetics - The Rift of Nûrz Ghâshu.