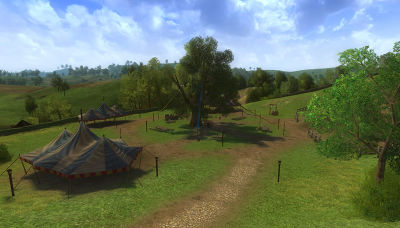 The Summer Festival 2011 has arrived! There is fun and games for everyone and this year is no exception!

This year's Summer Festival features many exciting event and games This guide will help you find every game in which you could ever hope to participate while Festival-time looms in Middle-earth.

Keg Racing
Where: The stairs leading to Thorin's Hall
The dwarves of Thorin's Hall are having races amongst the doughtiest drinkers and runners of their folk. You can observe the races and venture a guess at who is the likeliest to win.

The Inn League
Where: The Party Tree.
The Inn League is always looking to recruit new members. Can you down all the ales and beers in the Shire before the time runs out?

Missing Things
Where: The Party Tree, The Festival Garden, and Thorin's Hall
Many festival patrons of Middle-earth are a bit zealous in their appreciation, and may need help gathering their wits when all is done.

The Ale Association
Where: Thorin's Hall's Inn
The Ale Association has expanded, for better or worse. Jonar the dwarf and his bullying ways have made quite an impression on many dwarves, and he is always looking to recruit more in his spiteful endeavors against the Inn League.

Fishing
Where: Bywater (for starters)
Beginning in Bywater, you will have the opportunity to do some exciting angling in several different areas of Middle-earth.

Fireworks
Where: The Festival Grounds in the Horsefields
Brighten the festival with rockets, the likes of which haven't been seen since Bilbo's time.

Dancing
Where: The Festival Garden, Bree-land Festival Grounds, The Party Tree, and the Thorin's Hall Tavern
Dance with the dance-trainers to learn how to dance like Elves, dwarves, Men, and hobbits! The trainer will grant you an opportunity to learn a new dance every twenty minutes.

Farming
Where: The Party Tree, Hobbiton-Bywater
You must be a farmer by profession if you would like to participate in the farming quest.