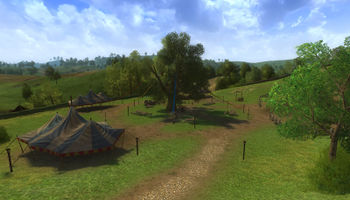 The Shire: The Party Tree and Bywater

Where: The Stairs to Frerin's Court

The dwarves of Thorin's Hall are having races amongst the doughtiest drinkers and runners of their folk. You can observe the races and venture a guess at who is the likeliest to win.

Where: The Party Tree

The Taste of Hobbiton invites hobbits with the most famous appetites to come and partake in a race to eat and run, and eat some more, as fast as the hungriest hobbit possibly can.

Where: Bywater (for starters)

Beginning in Bywater, you will have the opportunity to do some exciting angling in several different areas of Middle-earth.

Brighten the festival with rockets, the likes of which haven't been seen since Bilbo's time.

Where: The Festival Garden, Festival Grounds, The Party Tree, and the Thorin's Hall Tavern

Dance with the dance-trainers to learn how to dance like Elves, dwarves, Men, and hobbits! The trainer will grant you an opportunity to learn a new dance every twenty minutes.

Where: The Party Tree, Hobbiton-Bywater

You must be a Farmer by profession if you would like to participate in the farming quest.

Where: The Party Tree, Hobbiton-Bywater

The Inn League is always looking to recruit new members. Can you down all the ales and beers in the Shire before the time runs out?

Where: The Party Tree, The Festival Garden, and Thorin's Hall

Many festival patrons of Middle-earth are a bit zealous in their participation, and may need help gathering their wits when all is done.