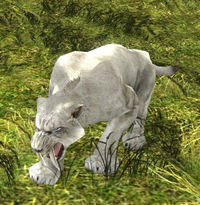 It's primary role is to deal damage to several targets at once, similar to that of a Champion. It is the only Lore-master pet that does not deal common damage on auto-attacks. Instead, it deals frost damage. Since most enemies are more susceptible to frost than to common damage, the sabertooth's DPS is high compared to other pets, especially on multiple targets. It also has the ability to initiate fellowship maneuvers, albeit unreliably. Still, many Lore-masters do not use the sabertooth regularly, because the relative damage output of pets is a lot lower than that of players, meaning that the outgoing damage of a pet does not influence fights that much therefore, players often choose their pets on ground of other benefits, like flank rate or debuffs. That said, the sabertooth is very effective for killing multiple weak targets without the Lore-master having to bother about them, for instance by putting it on an enemy that spawns multiple weak adds continuously. It can even be used to complete tier 1 skirmishes AFK.

The sabertooth cat has an average flank rate.

The last three skills on the Sabertooth Cat's Skill Bar are:

A Sabertooth Cat can eat Cuts of Meat to temporarily increase it's melee critical & defence ratings. Cuts of Meat are crafted by Cooks.

A Lore-master has the ability to learn skills that change the appearance of their pet by consuming talismans. These talismans are crafted by Jewellers or can be purchased at the LOTRO Store. *Please Note: Talisman Tomes are no longer in the LOTRO Store. They can now be purchased for Mithril Coins from the Lore Master Trainer at Tinnudir in Evendim. They cos 25-35 Mithril Coins each depending on the variety you choose.