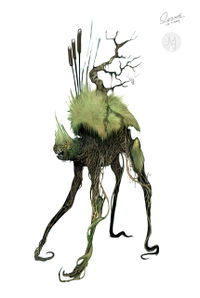 Found in the forested wetlands of western Middle-earth, the bog-lurker lives a concealed existence in the darkened wilds. To the casual observer, the body of the bog-lurker is seemingly made of root and bramble, its back alive with marsh-plants and its limbs formed of bark and wood.

Ancient tales tell of the creature working alongside the mighty Ents of Eriador, acting in their service to assist in the shepherding of the trees. While the Ents retreated from those lands, the bog-lurkers remained, living a solitary life separated from their masters, although they are occasionally found in the company of the forest Huorns they once tended.

Bog-lurkers are unique to LOTRO and were designed and visually conceived to be in the same class of creature as Ents and other "natural" inhabitants of Middle-earth. Bog-lurkers tend to stay out of the affairs of the speaking races of Middle-earth, preferring their own isolation to the wars between good and evil. However, in the wetlands of Eriador, adventurers would be wise to be cautious in their presence, as the corruption and darkness of Mordor and Angmar have found their way even into the most desolate marshes. Beware the rustling in the brush. It may be only the wind in the reeds, or it may be a watching bog-lurker, turned to the service of darker powers.

A listing of bog-lurkers identified so are in Middle-Earth that are likely to be dangerous: